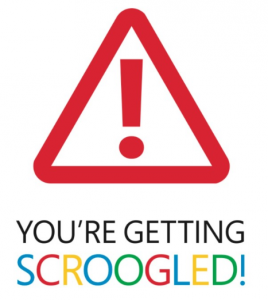 Microsoft's efforts to downplay Google's Gmail over its own Outlook.com service are well known amongst the tech crowd. In late-November the Redmond, Wash.-based corporation claimed that a third of new Outlook.com signups were people switching from Google's email service, and after the web giant dropped support for EAS, Microsoft quickly advised Gmail users to make the same switch. Now Microsoft is at it again, launching a new crusade titled "Don't Get Scroogled by Gmail".

The purpose of the campaign, according to the software firm, is to "educate consumers that Google goes through their personal emails to sell ads". Don't Get Scroogled by Gmail is aimed at American Gmail users and is supported by a GfK Roper study commissioned by Microsoft that found "70 percent of consumers don’t know that major email providers routinely engage in the practice of reading through their personal email to sell ads", with a vast majority of people, 88 percent, disapproving of this practise once the information was brought to their attention.

Well fine, but as you and I may ask: Why just target Gmail? Surely Microsoft could have taken various other email services to task as well. Fact is this has nothing in common with a "for the greater good" plan, but rather is a targeted plot to save Gmail users from the "evil" Google, by getting them to switch to Outlook.com.

Microsoft's senior director of Online Services says that: "Emails are personal — and people feel that reading through their emails to sell ads is out of bounds. We honor the privacy of our Outlook.com users, and we are concerned that Google violates that privacy every time an Outlook.com user exchanges messages with someone on Gmail. This campaign is as much about protecting Outlook.com users from Gmail as it is about making sure Gmail users know what Google’s doing."

Microsoft has a solution to this problem, as you might imagine, and has launched a petition on Scroogled.com to help "consumers have their voices heard" and "tell Google to stop going through their emails to sell ads". Microsoft also states that Gmail users should "prioritize their privacy by switching to Outlook.com".

But what the Redmond, Wash.-based corporation seems to fail to realize is that being a Gmail user is both a choice and a necessity.

In my case I use various other Google services connected to my Gmail account and I'm quite sure millions of other people are in a similar position. If I were to, hypothetically, switch to Outlook.com I'd still have to use my Gmail account to log into Google+ and check for notification emails, for instance. At the same time using Gmail with all the targeted ads is a personal choice, one that I favor over Outlook.com when it comes to features and adjacent functionality.

I can also chat with my Google+ friends straight from Gmail, whereas I'd be stuck with Facebook Messenger on Outlook.com. By implication I'd be an even more active Facebook user and we all know how much Zuckerberg's social network values our privacy. To me that's a huge no-go.