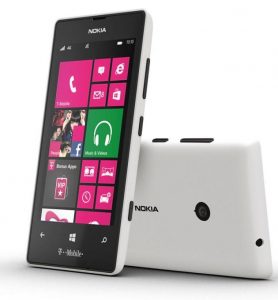 Starting today, the Nokia Lumia 521 is available at the third-largest carrier in the US. And you better sit down for what follows next. T-Mobile offers the entry-level Windows Phone 8 handset at a very attractive price-point -- $149.99 when purchased outright or $29.99 down coupled with $5 monthly installments over the course of two years.

What do you get for the money? The Lumia 521 packs a 4.0-inch IPS display with a resolution of 480 by 800, which can be operated using gloves. Power comes from a 1.0 GHz dual-core Qualcomm Snapdragon processor backed by 512 MB of RAM and a 1,430 mAh removable battery.

The Lumia 521 ships with 8 GB of internal storage and a microSD card slot which can extend the capacity by a further 64 GB (72 GB total). The smartphone only comes with a back-facing camera -- a 5 MP shooter capable of 720p video recording. Video chat fans might want to look elsewhere.

The Lumia 521 is an attractive choice for T-Mobile customers looking to grab an affordable smartphone. Only the one year-old BlackBerry Curve 9315 gets close in terms of price -- $168 outright or $7 per month over the course of two years. Which one would you choose?