Stick a fork in it, Windows RT is done 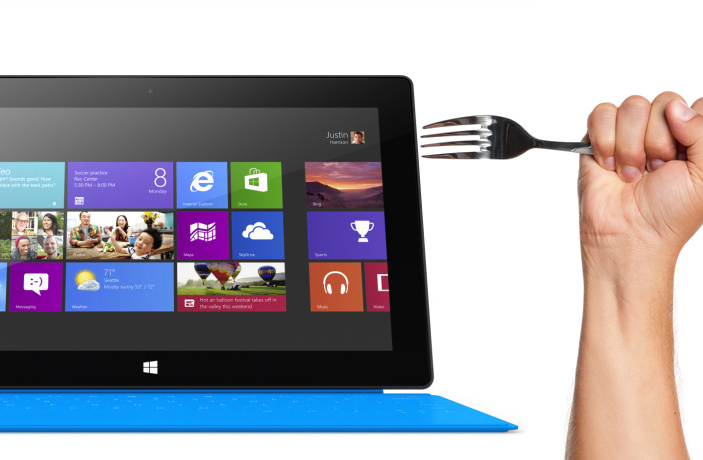 Microsoft has slashed the price of Surface RT, making the device pretty affordable. Anyone hoping that Surface Pro would see a similar reduction will be disappointed. Microsoft shows no signs of cutting the price of its premium tablet, suggesting the company is happy enough with sales and margins at the moment.

The problem with RT is it looks like Windows 8, and behaves like Windows 8, but isn't Windows 8. If you buy Surface RT, or any other tablet running the OS, you might reasonably expect to be able to run traditional software on it. But you can't.

There's a desktop, but it doesn't really serve the purpose you might expect. It's used to run Office applications, and other MS apps (such as Notepad), but that's about it.

RT, Microsoft's Windows-on-ARM experiment, is designed to access the web and run apps -- either built-in ones or those downloaded from the Windows Store. If you're happy to just do that, it's a decent operating system -- lightweight, and very good for battery life. Perfect for tablets.

But, as I say, Windows RT's biggest problem is that it's not Windows 8, and -- on paper -- it suffers badly by comparison. Surface RT looks like a crippled tablet when compared with Surface Pro. As if Microsoft has stripped out features for reasons of price. Which isn't the case. Not entirely.

When Microsoft launched RT it should have made greater differences to the operating system -- changed the look, added extra features that differentiated it from its bigger and better brother, killed the desktop and added app versions of Office. Made it a clearly separate tablet OS. Instead the company just pushed it out and hoped consumers would be savvy enough to understand the differences, and the benefits. But really all bemused shoppers saw was an operating system lacking important features. Features which typically had always been standard in Windows.

That Windows 8 Pro tablets are starting to arrive, and becoming cheaper, isn't helping RT's case either. The Acer Iconia W3 might be pretty awful, but at $380 for the 32GB model, it's an affordable tablet running Windows 8 not RT.

Cutting the price of Surface RT will shift stock, no question about it. And if the other remaining RT device manufacturers (Dell and Asus) follow suit, then the cut-down OS might limp on for a while longer, but to what end?

As my colleague Mihaita Bamburic said when we were discussing the subject in the newsroom, "ARM-based tablets should have great advantages like lightness and battery life, yet Intel is catching up in delivering both light-ish stuff and significantly faster hardware, without any of the ARM app compatibility nonsense. If Intel keeps up the pace, ARM will be history on mobile devices".

Microsoft is planning an update for Surface RT, but unless it's a major overhaul to the operating system, which is unlikely, there seems to be little point in continuing what is clearly a failed experiment.

109 Responses to Stick a fork in it, Windows RT is done