Surface RT takes on the iPad and wins! 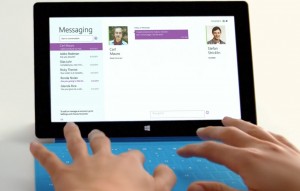 In the wake of the $900 million Surface RT inventory adjustment hit announced yesterday, Microsoft has released an updated ad comparing Surface RT to the Apple iPad. Microsoft warned that its marketing was going to get more aggressive and this ad is probably the strongest attack on the iPad we've seen to date.

I have long believed that this is the price point at which Microsoft should have released the Surface RT. Sure the company would have lost money, but it needed to get these devices into the hands of as many people as possible as early as possible. Furthermore, the commercials it is running now, are what it should have been running from the start. Surface RT, although it is not without its glaring weaknesses, has the beginnings of being a great product and I for one believe Microsoft should definitely stay the course.

I think this commercial is a slam dunk and I hope everything works out for Microsoft and it can start finally getting these devices into the hands of as many consumers as possible.

What do you think about this commercial? Is it a winner or should Microsoft give up on Surface RT?

90 Responses to Surface RT takes on the iPad and wins!