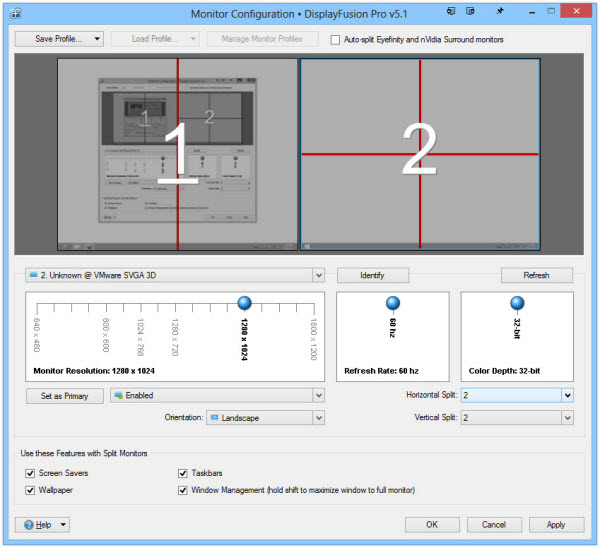 Binary Fortress Software has released DisplayFusion 5.1, a major update of its multi-monitor management tool for Windows. Available in both free and Pro versions, the latest version adds a number of notable new features, plus improves compatibility with the forthcoming Windows 8.1 release and promises better quality generated wallpaper images.

Monitor splitting requires a Pro license key (or can be previewed during the trial version) and is configured from the main monitor setup screen, with users choosing how many horizontal and vertical splits in the selected display to apply.

The new build also adds a number of tweaks to the Settings > Window Management dialogue box. Users can now scroll windows that are under the cursor, even if they're not the active window. They can also configure DisplayFusion to automatically move child windows over the parent.

The new build also improves the quality of generated wallpaper images in Windows 7 and later, plus enhances its plugins with support for multiple tag selection as well as allowing tags to be excluded.

Windows 8.1 compatibility is improved ahead of its release next month, and users can now configure DisplayFusion to log in and automatically load their license key on startup. Compatibility rules are also improved to allow multiple applications to be specified in a single rule using the | symbol.

The update is rounded off with 36 bundled languages, plus a number of bug fixes, performance and stability improvements. DisplayFusion 5.1 is available as a free download for PCs running Windows XP or later. The software comes with a built-in 30 day fully functional trial before reverting to a cut-down, free version. The full version can be purchased with licenses starting from $18.75 for a single computer.