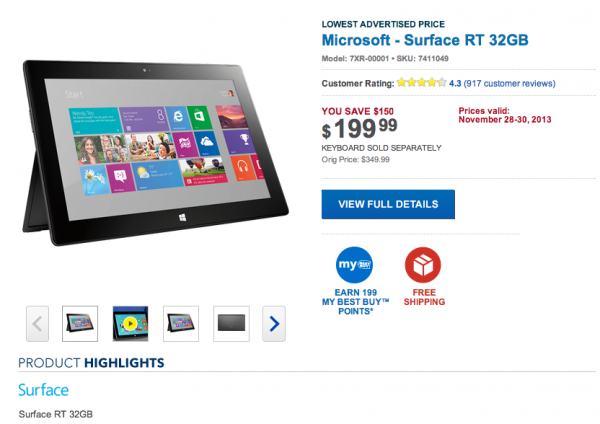 Yes, you've read that correctly. Microsoft's Surface RT tablet will be available at US retailer Best Buy under the magical $200 mark. The $199.99 price tag will be attached next to the Windows RT slate between November 28 and November 30, just in time for Black Friday.

The model that the US retailer will offer during that period is the 32 GB Surface RT without the bundled keyboard. Normally, the tablet would cost $349.99 at Best Buy, which makes the $150 discount look rather impressive.

Considering that Microsoft had millions of Surface RT units in unsold stock before mid-July, it does not seem like a stretch to assume that this deal is meant to minimize inventory as much as possible before the end of the year.

The path also has to be cleared for the Surface 2 (by selling the existing Surface RT stock), which is directly competing with its older sibling based on price. Both tablets run the same software, Windows RT 8.1 with Office 2013 RT.