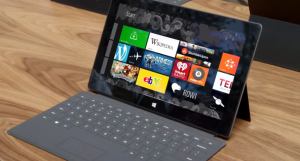 Since the release of the first iPad, consumers have been trying to use tablets as PC replacements. They retrofit them with keyboards trying to make them laptop-like. It's hard to blame them -- after all, the battery life of most tablets is very attractive.

Sadly, most tablets have proven to be companion devices to the PC, rather than a replacement. Luckily, Microsoft released the Surface line of tablets, which melds fun and productivity into a true PC replacement. This is because, well...it sort of is a PC. Today, the 32GB RT variant is being sold for a super-low $299 -- will you buy it?

True, this is the previous generation of the tablet, but sometimes buying previous-gen is the best way to save money. While you will not get the 1080p screen of the Surface 2, you do get a respectable 1366 by 768 resolution. You also get a USB port, integrated kickstand and the ability to run two apps side-by-side (something an iPad cannot do).

At $299 for the 32GB and $329 for the 64GB model, you can't go wrong -- both are an amazing bargain. The tablet will work wonderfully as a companion device or a computer replacement. After all, it can be connected to a monitor for longer computing marathons and has Office 2013 pre-installed.

I recently wrote an article suggesting some things to do once you buy a Surface 2, but it mostly applies for the Surface RT too. If you do decide to buy it, give it a read, it will definitely help you along your Surface journey.

Will you buy it at this price? Tell me in the comments below.