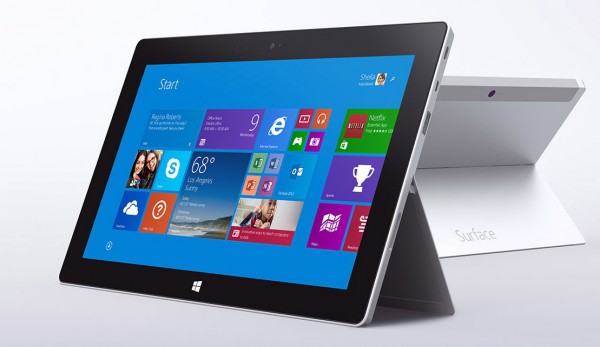 Colleague Wayne Williams is right to call out Surface Pro 3 hidden costs necessary to make a reasonable laptop replacement. There is another choice, which geeks often overlook. Surface 2 is a great value for the price, and everyone considering Apple iPad Air as a laptop replacement should look to Microsoft's tab first.

Before explaining, I start a diatribe that will continue to future posts. Geek reviewers hung up on specs and the fanciest features missing what matters more: Benefits -- to whom they are important and in what circumstances. Not everyone needs the fastest, coolest thing, or can afford it. Lower-cost is a benefit, too, and it's one too often ignored by fanboys and tech reviewers. Wayne gets it. So should you.

Sometimes less is more, which is how I see Surface 2's value compared to Pro models or set against iPad Air. Microsoft's tab is helluva value for $449 (32GB), $549 (64GB), or $679 (64GB LTE). Consider iPad Air: $599 (32GB), $699 (64GB), or $829 (64GB LTE), comparatively. Both tablets are capable-enough laptop replacements, with bright, HD screens -- 10.6 inches and 9.7 inches, respectively. Surface does have that handy kickstand and, as options, attachable keyboard covers. The tablet also comes with Office and will run Windows applications, which sets it apart from iPad and iOS.

I compare, even if briefly, Surface 2 and iPad Air, because of marketing and fanboy posts touting the Apple tab as laptop replacement. Perhaps, it is for some people. But any Surface is designed to meet hybrid needs. The kickstand and optional keyboard covers are available for a reason. Sure, Surface Pro is better-suited, but the ARM-based model can do, too.

Something else: In my experience, both devices are equally immersive -- another big benefit -- although in different ways. There, Modern UI finds footing.

There's an intimacy using iPad that is unlike most other devices, because you become part of the user interface. By contrast, Android tabs aren't there yet. Human beings are tool users who experience and manipulate the world through five senses. iPad appeals to the eyes through design, whether it’s the software GUI or hardware appearance. But the eyes are passive instruments. Hands and fingers are more important because they are active -- they’re how people tactilely manipulate the world around them.

Touch and the way iPad is held in the hands creates intimacy and pulls the user in. But the immersive experience isn't pervasive. iOS UI is a backdrop for hanging things. It lacks vitality. Life. Immersion is more about select apps, particularly those that present content, such as ebooks and magazines. Touch interaction with iOS is actually quite limited.

By contrast, the Windows 8/8.1 Modern UI, at least as implemented on Surface, is a living thing. Immersive touch is everywhere. Surface draws me below the surface into another place of focused interaction. The experience is simply breathtaking and makes the iOS user interface feel ancient. Windows 8.1 critics are many, and I am no fan on a traditional PC. But running on a tablet, particularly Surface, the user experience is lively. There is movement, vitality, and active, immersive interaction to Modern UI.

I see some of the cruelest Surface 2 criticism coming not from Apple fanboys but geeks complaining about Windows RT limitations. Microsoft locks down the operating system, by limiting apps to the Windows Store and making Internet Explorer the browser choice. That's all true, but for anyone living the Microsoft lifestyle, Surface 2 is great choice. Surface Pro is for the power set, or anyone really needing to install legacy apps or others, like Chrome. I see the 10.6-inch screen as desktop-placement ready as the newest model's 12-incher (FYI: I reviewed the original Pro last year.)

For months, I've eyed Surface 2 as a great bargain, and if I lived the Microsoft lifestyle would almost certainly buy one. That's another benefit often overlooked by feature-obsessed reviewers. The major platform providers sell digital lifestyles around their core products -- mainly Apple, Google, and Microsoft. If Bing, Internet Explorer, Office, Windows, Windows Phone, and Xbox are your lifestyle, Surface 2 is an excellent value option. The iOS and OS X crowd should stay away, and of course anyone depending on core Google services anchored around Chrome.

Yesterday, I ordered the original Surface -- what was the RT model. While affordable, the successor's price exceeds my tight budget. I wear bifocals and find finer, smaller type to be less easily-read than in my youth.

For web writing, my Chromebook Pixel is more than enough and it works well enough for producing ebooks. But there's a wrinkle with the latter. Most ebook publishers prefer submissions in Word, so I need to do final pagination there.

I will continue to write on Chromebook Pixel (using Google Docs) but do final layout and production in Word. I contacted Microsoft Store looking for a deal on the original Surface. Sure enough, refurbished: $199 (32GB) or $219 (64GB). Wow, what a bargain! Refurb 64GB tablet with PLS display for $219? With keyboard cover and tax I will spend less than $300 and get better panel and construction than any Chromebook other than Pixel.

Brian wondered if I am souring on Chromebook. I responded, about Surface: "It isn't my full-time rig anyway. This is for ebook pagination. I love my Pixel for nearly everything else".

22 Responses to Why not Surface 2?