Microsoft OneDrive is now the place for your photos 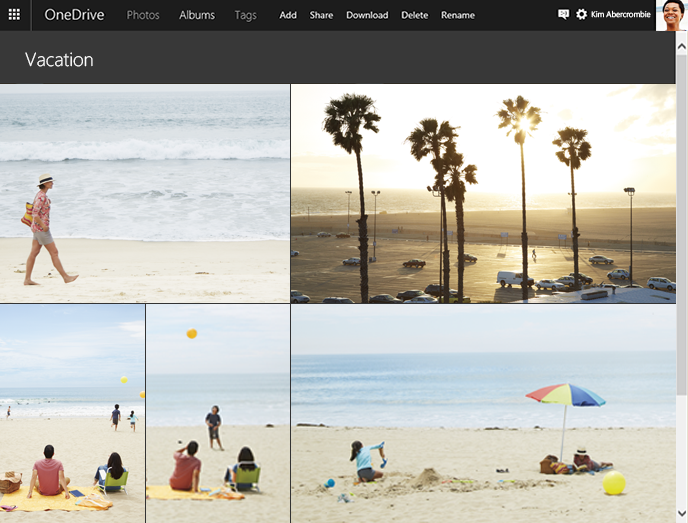 Microsoft wants its cloud storage service to be the best place for all of your photos, and so is debuting new ways to import, organize, find, improve, and share them.

According to Douglas Pearce, OneDrive’s Group Program Manager, major updates coming over the next couple of weeks include: "the ability for customers to curate photos from their phone, desktop and inbox quickly and simply; a new feature that allows you to view, manage, and share photos with Albums; and finally, through a partnership with Bing, customers can now search for their files and photos in a new and exciting way!"

You can already automatically upload photos and videos to OneDrive using the relevant Android, iOS, or Windows Phone app, but over the next month Windows 7 and 8.x users will also be able to automatically import and upload photos from connected devices -- such as digital cameras, USB memory sticks and external hard drives. And if you take screenshots, those will be uploaded to OneDrive automatically too.

From today OneDrive gains an Albums feature to make it easier to view, manage, and share your snaps. Albums have larger photo thumbnails, and images arranged attractively edge to edge, like a collage. And that’s not all. As Douglas Pearce explains, "Albums also let you bring photos and videos together from anywhere in your OneDrive. You don’t need to copy files from other folders. That means you can easily create an album using photos from your phone in your camera roll folder, your camera in your 'European Vacation 2012' folder, or from your email, with the photos you saved to your attachments folder. And even more, you can also add to your albums after they’ve been created and shared".

Albums is available from today on the web and the OneDrive iOS app. It will be followed shortly by Android and Windows Phone (Microsoft once again prioritizing iOS over its own mobile platform, which will annoy the Windows Phone faithful, but is the smart business choice). Users will also be able to receive Weekend Recap emails -- these contain sample photos that you took over the weekend, ready for sharing with friends.

Finding files in OneDrive is getting a boost too thanks to a close partnership with Bing. Users will be able to find Office documents and PDFs by searching for text inside them, and track down images based on time, location, and even text recorded in your photos (street signs, for example, or menus). In addition you can search for photos based on tags you’ve added yourself, or which Microsoft has automatically generated.

This is great news for photographers, although the 30GB you get for storage (if you turn on the camera backup) looks rather stingy compared with the 1TB Flickr offers for free. Maybe if Microsoft is really serious about appealing to photographers it will up the quota at some point in the future.