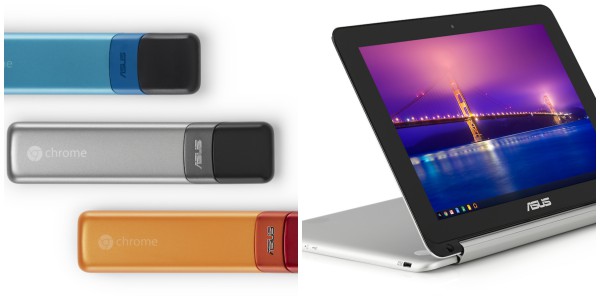 If my calendar showed April Fools' Day instead of March 31st, I would think the big Google announcement was a joke: $149 Chromebooks, with one model available from Walmart? I know some of these laptops sell for $199. But $50 less and models from Haier and Hisense?

Meanwhile, ASUS will, in summer, start selling something for even less: Chromebit, a $100 candy-bar size carry-all computer. Plug it into a HDMI-compatible display (like your TV), and your Chromie lifestyle is even-more mobile. The company also will release Chromebook Flip, a tablet-convertible wannabe, sooner. Someone tell me: This isn't a Foolie prank?

By Any Other Name Netbook?

None of these computers is high-powered by any means. What do you expect for used Ford Pinto prices, a Mercedes? Chromebook Pixel LS is the luxury laptop for you, otherwise. By the specs, these are netbooks running Chrome OS.

ASUS Chromebook Flip: 10.1 IPS display; 1.8GHz Rockchip 3288 quad-core processor; ARM Mali 760 quad-core graphics; 2GB or 4GB RAM; 16GB storage; WebCam; WiFi AC, and Bluetooth 4. Stated battery life: Up to 10 hours. Price: $249. Note: Not laptop flips around such as the touchscreen is angled to the keyboard, which acts like a stand.

All four devices use the same core chips and, based on my experience, come with too little system memory. The Flip's IPS display is tablestakes, while the 200-nit screens on the other two don't ante up. What's the saying? You get what you pay for.

Chromebit is the most-interesting, ah, bit here. The device turns just about any HDMI-equipped TV or display into a computer. For $100, that's not bad benefit.

Timing is interesting. At the weekend's start DigiTimes speculated that Microsoft would enable OEM partners to bring $149 Windows laptops to market, as a means of combating Chromebooks, particularly among K-12 educational institutions.

As a seasoned journalist, I long ago learned not to believe in coincidence. News of the one likely relates to the other, whether Microsoft proactively seeded vaporware news ahead of today's Chromebook announcements, or Google rushed ahead before actual sales start—or both (and, yes, maybe neither, but don't you love conspiracy theories). Big G and M share many of the same partners. For sure, each is tipped off about the other's plans.

Maybe Microsoft should leave $149 to Chrome OS and keep Windows a bit more premium. Perception is everything in business, and these new Chromebooks come off cheap, for price and configurations—and my skepticism about user experience is wider than—what—the Grand Canyon, the distance between our galaxy and Andromeda? I can't even say because it's so big.

Keep in mind that I am a Chromebook enthusiast, which is all the more reason to be critical. I want to see the platform succeed. Cheapo Chrome OS laptops look like poison pills to me. If they're slow and laggy, particularly in the school setting, sales could collapse. What? Educational IT administrators don't talk? Buzz doesn't spread?

Value for price is one thing. By the measure of the configs, the $149 models are not. The Flip impresses some, for the IPS screen. But for that price, 2GB RAM is still too little, particularly for an ARM-based Chrome OS computer.

All that said, the nagging question: Will the partnership with China's Rockchip open up new markets for Chromebooks, particularly in regions where low price matters more than performance? For sure, such circumstance would be in keeping with Google's "for everyone" marketing tagline. But that's a topic I raise but must answer in a future analysis.

BTW, if you haven't taken our Chromebook Pixel 2015 buying poll, please do.