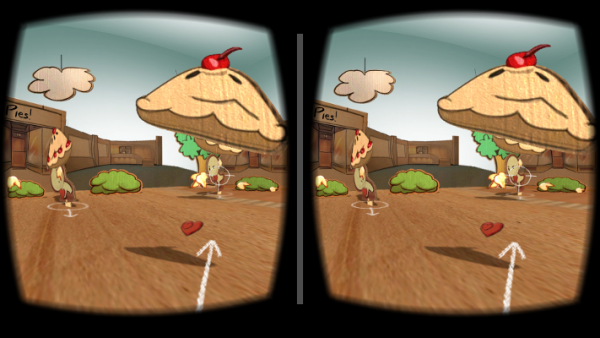 Virtual reality is definitely a popular thing nowadays. Unfortunately, the hardware can be rather expensive. Not to worry though, it doesn't have to be pricey. Last year, Google released its Cardboard project, bringing virtual reality to anyone with a compatible Android phone and some cardboard (plus rubber bands and lenses, etc.).

Today, the company announces it is bringing its open source Android game, Pie Noon, to Cardboard. Are you ready to play a game with your smartphone strapped to your face?

"Fun Propulsion Labs at Google is back with an exciting new release for game developers. We've updated Pie Noon (our open source Android game) to add support for Google Cardboard, letting you jump into the action directly using your Android phone as a virtual reality headset! Select your targets by looking at them and throw pies with a flick of the switch", says Anthony Maurice, Fun Propulsion Labs at Google.

Maurice further says, "we used the Cardboard SDK for Android, which helps simplify common virtual reality tasks like head tracking, rendering for Cardboard, and handling specialized input events. And you might remember us from before, bringing exciting game technologies like FlatBuffers, Pindrop, and Motive, all of which you can see in use in Pie Noon".

Believe it or not, I have logged some time playing this game on my TV using the Nexus Player, and it is actually pretty fun. Yes, the gameplay is a bit simplistic, but the art style and design is refreshing. With that said, playing it with Cardboard will make it a much different experience.

If you want to try this game on Cardboard, you can download it here. Interested in messing around with the code? You can access it on GitHub here.

One Response to Google brings open source gaming to Cardboard