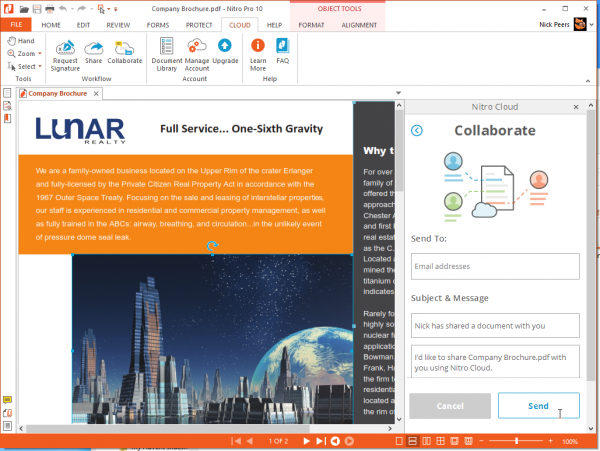 Nitro Pro has been the budget alternative to Adobe’s expensive Acrobat PDF conversion and editing tool for a number of years now.

It’s been 18 months since Nitro Pro 9.0 was released, which added a smattering of minor new tools and refinements, and version 10 continues in the same vein, unveiling a handful of new tools, some useful improvements and the promise of better performance -- up to 40% faster in fact.

That Nitro Pro 10 isn’t a major new release shouldn’t come as a surprise -- it came of age a few years ago now, and the "if it ain’t broke, don't fix it" mantra continues to be a wise one for Nitro to follow. Having said that, our eyebrows were raised when we discovered the price has gone up again -- another $20 for new users, and $10 for those upgrading from versions 8 or 9.

This begs the question: are there enough new features and improvements in Nitro Pro 10 to justify a second price hike is as many versions?

Nitro Pro is a powerful tool for creating, editing and converting PDF documents. While free products -- including Nitro’s little brother Nitro Reader -- can create PDF files from other documents, they typically employ the services of a virtual print driver to produce little more than an image of the original file.

Nitro Pro offers more intuitive PDF creation tools, allowing you to create PDFs from documents like Word that can subsequently be re-edited in Nitro using its own powerful text-editing tools. And if you want to scan in a paper document, Nitro also comes with its own serviceable OCR engine, based on Readiris to ensure the resulting document’s text is editable too. Version 10 comes with the promise of improved accuracy with text, image and table recognition and adds an automatic de-skew function that aligns images correctly during the scanning process.

Nitro pairs this functionality with a set of powerful editing tools, with both line and paragraph-based text editing possible alongside the ability to swap out or insert images. Throw in form filling, collaboration tools and the ability to combine PDF files from multiple documents, and you have a tool that -- if not quite the equal of Adobe Acrobat -- is more than capable for most people’s needs at less than a third of the price, even after the latest price rise.

Get the Microsoft look

Nitro Pro’s interface is tied in closely to Microsoft Office 2013, sporting the same ribbon user interface to provide familiarity for those moving between the two apps. Version 9’s interface was simple and intuitive to use, so it’s perhaps not so surprising that version 10 adopts exactly the same look – aside from new buttons on the ribbon pointing to the new features, you’d be hard pressed to tell the difference.

Nitro’s close ties to Office mean it ships with plugins for Word, Excel, PowerPoint and Outlook, and the good news is that version 10’s plugins are now compatible with 64-bit iterations of Office as well as 32-bit versions.

Version 9 saw Nitro Pro gain integration with Nitro Cloud, the company’s web-based service for sharing and collaborating on PDF documents with other users. It's easier to use the service directly from within Nitro as it gives you access to all of its advanced editing capabilities while making it simple to share and collaborate. All of its tools are found on the Cloud tab.

Some new features have been added too -- Review & Markup tools can now be accessed through your web browser with sticky notes, instant messaging, highlighters and so on all available. And Nitro Pro 10 integrates fully with Google Drive, OneDrive and DropBox too -- you’ll need to install the relevant desktop clients if necessary, and then you can access your storage via convenient shortcuts in the File tab.

If Nitro Pro 10 has any single headline feature, it has to be its Batch Processing tool, accessible from the File tab. This follows on from version 9’s time-saving Batch Print tool, and allows you to perform multiple actions -- in a specified order – on one or more documents.

The tool itself works perfectly: build a collection of actions into sequences, which can be saved for future use (and cloned as templates for other sequences). These can then be performed on one or more documents with just a few clicks.

There are 12 supported actions in this initial implementation, six of which are for batch-converting documents from PDF to Office or PDF/A formats.

Of the others, you can quickly strip all comments, print, tweak password security, or apply custom JavaScript code. There are also two handy OCR tools for making your documents searchable or searchable and editable.

Selected actions can be customized -- specifically executing JavaScript (so you can insert your custom code), password security, converting to Word, Excel or PowerPoint format, and printing.

It's undoubtedly got great potential, but we’re slightly disappointed that there aren’t more options available, like QuickSign or extracting images from multiple documents at once, but this is hopefully something for a future version.

Version 10 also adds an option to create PDF Portfolios -- these are basically wrappers (like zip files) into which you can store any kind of file, including PDF, Office documents or images. Users can then open the PDF portfolio in compatible apps (including Nitro 10, of course) to view or extract the files within.

It’s not innovative, but it’s welcome nonetheless, as is support for the PDF/A format, which was designed to provide a format capable of digitally preserving documents through the use of forced standards such as font embedding as opposed to linking. Nitro supports Part 1 and Part 2 standards, but is sadly lacking support for PDF/A Part 3, which allows users to embed additional files within the document as attachments.

Nitro Pro 10 also implements some other welcome tweaks and improvements -- the search tool has been overhauled to become a floating bar, accessible via [Ctrl] + [F]. You’ll also see a new Advanced Search option -- this opens a sidebar that provides you with context for search results, helping you jump to the right point in your document.

It’s now possible to quickly copy pages from one open document to another using the Pages sidebar. All you need to do is make sure your target document or documents are open in another Nitro tab or window, then click and drag the page from one Pages sidebar on to the tab or window of another, using its sidebar to place it exactly where you want it to go.

Nitro 10 also makes it easier to edit text -- roll your mouse over an element to highlight it, then click once to start editing. The Crop tool has also been improved with the addition of predefined page sizes as well as custom measurements.

The Optimize PDF dialog has also been overhauled, to reduce the bewildering array of options down to just three basic options. Nothing’s been removed in terms of functionality, but in some cases -- those who used the old Professional Quality setting for example -- there's now more hoops to jump through rather than less.

Nitro Pro 10 continues to evolve at a steady pace, adding -- on the whole -- useful tools to its burgeoning feature set. Despite the lack of options, the Batch Processing tool will prove useful to those tasked with processing multiple documents in the same way, while the Editing tools have successfully been tweaked to be more intuitive to use. The Search tool has finally become useful too thanks to the sidebar and floating search box, and support for PDF/A and PDF Portfolios ensure Nitro Pro stays up to date.

The program itself also benefits from performance improvements, which make it that bit more responsive.

It’s getting harder and harder to find fault with Nitro Pro. There are still some niggles with the editing tools -- things don’t always do what you expect them to, but this is nit-picking of the highest order. The OCR engine is still not quite the equal of a dedicated tool either, but version 10 does see some welcome improvements make that criticism harder to stick – the automatic de-skew function in particular will be a bonus (and works brilliantly).

One thing we’re a little miffed at yet another price rise. Although the program remains comparably great value, its price is starting to drift out of the each of more casual users, and those considering an upgrade might do well to install the 14-day trial (which can be run alongside version 9) before committing to a fresh purchase.

Nitro Pro continues to age like a fine wine, but the days of it disrupting the PDF editing market are long gone now. It’s settled into a comfortable spot behind Adobe Acrobat – it can’t hold a candle to its feature list, but Nitro Pro offers enough power and features to satisfy the vast bulk of those needing to create and edit PDFs, and version 10 does nothing to jeopardize that.

It also remains good value too: a brand new license of Nitro Pro, which gives you a lifetime’s use of the product, still costs less than a single year’s subscription to Acrobat. And if you’re still running Nitro Pro 8, then the cumulative updates of versions 9 and 10, coupled with a compelling upgrade price, make this latest version hard to resist.