HoloLens' field of vision isn't quite as impressive as you thought 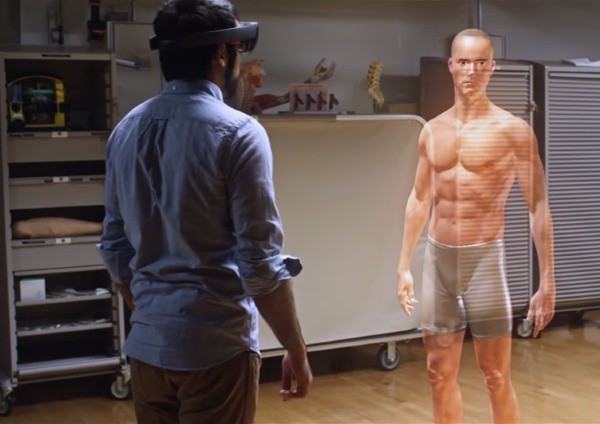 Microsoft has released new footage of HoloLens in action including an almost-first-person perspective that gives an idea of what it's like to wear. What's interesting to note is that, despite the promises of an immersive experience, the field of vision is rather smaller than many people will have expected.

The video shows HoloLens can be used in medicine, with users interacting with holographic 3D models of the human body. As well as the third-person perspective we've already seen, we're also treated to a glimpse of what it is like to look through HoloLens when in use. The wide-angle shots demonstrating what people look like when they’re using HoloLens are great -- it's hard not to be impressed by the three dimensional renderings that hover in front of the user. But step inside the headset, and it's a slightly different story.

With the out-of-body view, you'd be forgiven for thinking that with HoloLens strapped to your head you are transported to another world. Step into the users' shoes, however, and you'll find that this is not actually the case. The new video gives us just the briefest glimpse of HoloLens field of vision. And it is a brief glimpse; blink and you might miss it. Skip to around the 0:41 mark and you can see what the HoloLens wearer sees.

Notice anything? The holographic display does not fill the user's entire field of view, rather there is almost a projected HUD hovering in front of them. It's more like a holographic TV... and that means edges, borders, and things being cut off.

Not that the video gives you long to acknowledge this fact. A second later we zoom back out to third person view so we can see a series of human models in their full, unconstrained glory. Disingenuous? Maybe. It's still hard to say just what HoloLens feels like in use, and it could be that the hovering-screen view works incredibly well... but on the face of it, it is a little disappointing.

Check out the video below and see what you think. Does it cut the mustard?