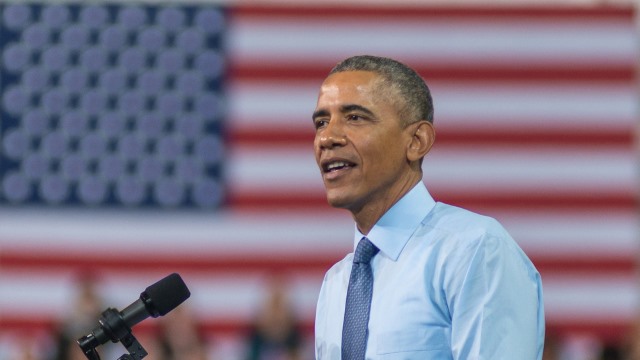 The on-going battle between Apple and the FBI has brought encryption and security to the fore once again. After remaining silent on the subject for some time, President Obama -- speaking at SXSW -- said that he was opposed the idea of encryption mechanism that are so strong it prevents governmental access.

"If technologically it is possible to make an impenetrable device or system where the encryption is so strong that there is no key, there's no door at all, then how do we apprehend the child pornographer, how do we solve or disrupt a terrorist plot?" he wondered aloud, his almost rhetorical question playing neatly on two of America's biggest fears. He suggested that security keys should be made available to third parties, saying "you cannot take an absolutist view" when it comes to balancing security and privacy. But Obama has a solution: backdoors.

Obama avoided talking directly about the Apple/FBI case, but it hung heavy in the air nonetheless. So what is his solution to the issue of encryption standing in the way of government being able to access whatever it wants? The out-going president's answer to the problem is far from fleshed out, and far from being a solution that anyone in their right mind would find agreeable. Addressing the SXSW audience, he said:

What mechanisms do we have available to even do simple things like tax enforcement because if in fact you can't crack that at all, government can't get in, then everybody is walking around with a Swiss bank account in their pocket.

While Obama says that he backs the notion of strong systems of encryption, he said that for issues that were agreed to be important (by whom he did not make clear) it should be possible for the security key to be made available to "smallest number of people possible". A backdoor by any other name.

There has to be some concession to the need to be able to get to that information somehow.

Dress it up any way you like, but Obama is suggesting that backdoors should be implemented. He even went on to admit the folly of his suggestion:

Now what folks who are on the encryption side will argue is any key whatsoever, even if it starts off as just being directed at one device, could end up being used on any device. That’s just the nature of these systems. That is a technical question. I am not a software engineer. It is, I think, technically true, but I think it can be overstated.

Taking a view that goes against just about every tech company out there -- most of whom have come out in support of Apple -- the president said:

So if your argument is strong encryption no matter what, and we can't and shouldn't make black boxes, that I do not think strikes the balances we've struck for 200 or 300 years and it's fetishizing our phones above every other value. And that can't be the right answer. I suspect the answer will come down to how can we make sure the encryption is as strong as possible, the key as strong as possible, it's accessible by the smallest number of people possible, for a subset of issues that we agree are important. How we design that is not something I have the expertise to do.

Therein lies the problem. The activities of the NSA have destroyed what little trust people may have had in the government to work with security and privacy has been eroded to the point of being non-existent. The same is true of the tech community in general and tech companies specifically. Seemingly oblivious to this, Obama concluded by saying:

We're going to need the tech community, the software designers, the people who care deeply about this stuff to help us solve it. Because what will happen is if everyone goes to their respective corners and the tech community says 'Either we have strong, perfect encryption or else it’s Big Brother and an Orwellian world,' what you’ll find is that after something really bad happens, the politics of this will swing, and they will become sloppy, and rushed, and it will go through Congress in ways that have not been thought through. And then you really will have dangers to our civil liberties because the people who understand this best, who care most about privacy and civil liberties, will have disengaged or taken a position that is not sustainable for the general public as a whole over time.

Sorry, Barrack, but you've missed the point. What you are calling for simply cannot coexist alongside strong encryption. By your own admission you don't understand what’s involved, and this speaks volumes. Tim Cook is right. Whatever the outcome of the Apple/FBI case, it has the potential to set a huge, and potentially dangerous, precedent. Encryption and privacy should always win out.