A new report shows that 43 percent of consumers in the US and Canada don't know what ransomware is. A similar number (44 percent) say they don’t know what data or information could be stolen in a ransomware attack.

The study by Kaspersky Lab surveyed 4,000 US and 1,000 Canadian consumers aged over 16 and found that only 16 percent mentioned ransomware as a cyber threat they were worried about, compared to their concerns about viruses, spyware and Trojans.

Even among the supposedly tech-savvy millennial generation only 13 percent said they were worried about ransomware in general. Also, many respondents wouldn’t know what to do if a ransom attack occurred. The survey finds that 15 percent of Americans and 17 percent of Canadians think unplugging the computer or turning off the mobile device could stop it, with a small amount even believing negotiating with the attacker is the best way to stop the attack. The percentage of those who would not know what steps to take in a ransomware attack grows with age, from 37 percent of those aged 16-34 to 54 percent of those aged 55+.

"Right now, ransomware is an epidemic. Although it has been around for more than a decade, we have seen a recent explosion of new ransomware families that is cause for serious concern," says Ryan Naraine, head of the Global Research and Analysis team in the USA at Kaspersky Lab. "With this epidemic, the need for increased consumer awareness about ransomware is essential. Consumers today must not only learn about ransomware, but also use solutions to protect themselves against it, including installing internet security, making sure all devices are updated with available software patches, routinely backing up all important digital assets and implementing better user habits".

You can read more about the findings in the full report which is available as a PDF from the Kaspersky Lab site and there’s a summary of the findings as an infographic below. 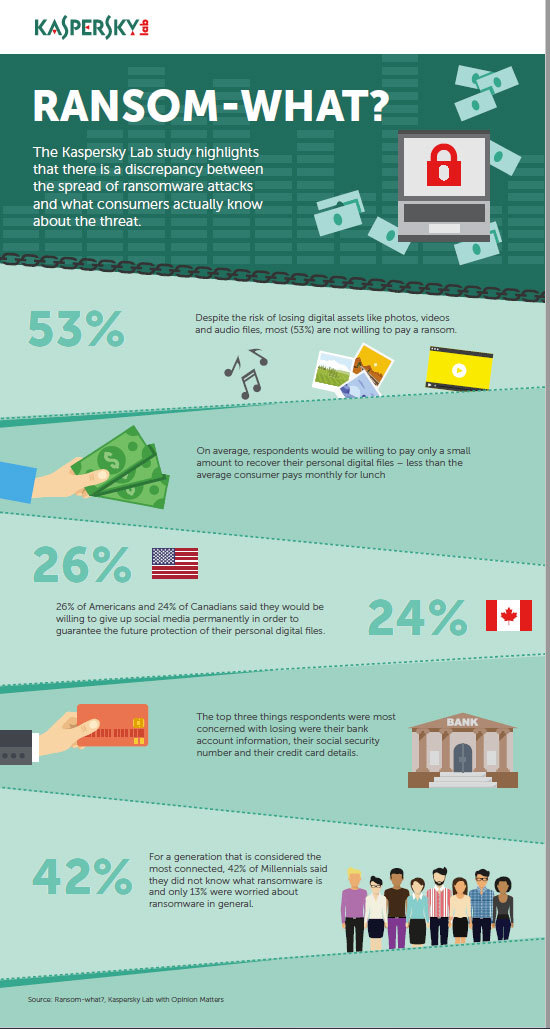 11 Responses to Ransomwhat? 43 percent don't know what ransomware is