Backup and Sync from Google launched for Windows and Mac 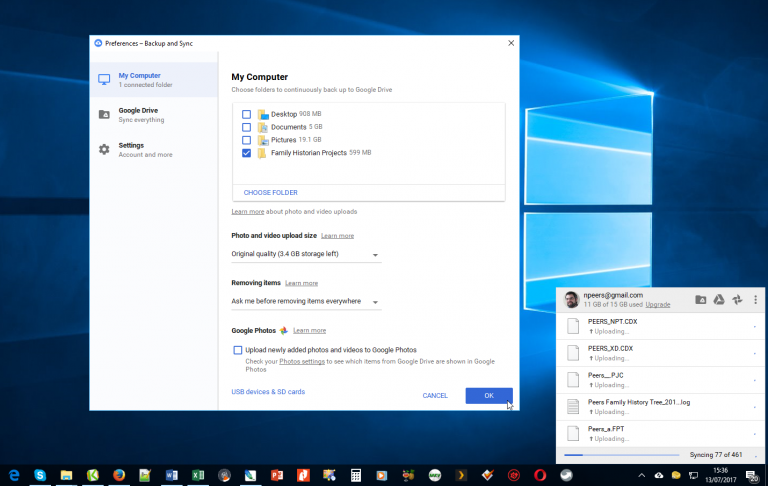 Google has released Backup and Sync from Google 3.35 for Windows and Mac. The tool replaces its Drive and Photos desktop apps (both discontinued), and provides a one-stop desktop tool for backing up and syncing files to Google Drive and Photos.

The new tool also introduces a new backup function, which allows users to back up selected folders on their computers without having to tie them into their Google Drive folder.

Although given a modern design refresh, Backup and Sync from Google will be instantly familiar to existing Drive users. There’s no reinvention of the wheel -- it will automatically replace Google Drive (in the case of Mac users, the old Google Drive application shortcut will be redirected to Backup and Sync if applicable), and users will see that the new app works in pretty much the same way as the old app.

The new backup feature can be configured under the program’s preferences -- accessible by clicking the ≡ button on the pop-up window. Under the My Computer or My <Computer Name> tab users will find convenient shortcuts to the current user’s desktop, Documents and Pictures folders along with a 'Choose Folder' link for manually specifying folders to back up.

These folders are backed up separately to the user’s Drive folder, but they contribute towards the user’s overall Google Drive storage (15GB for free, shared with Google Mail and non-compressed photos and videos).

This tab is where users can also configure their Google Photos accounts for automatically backing up user-generated photo and video -- be sure to select 'High-quality' to prevent content eating into available storage space.

The other two tabs -- Google Drive and Settings -- work as they did in the previous Drive app. Users experiencing sluggish internet speeds while syncing should click Network Settings under Settings to set an upload limit (say 75 percent of total upload speed).

Backup and Sync from Google 3.35 is available now as a freeware download for PCs running Windows 7 or later, and Macs running OS X 10.7 or later.