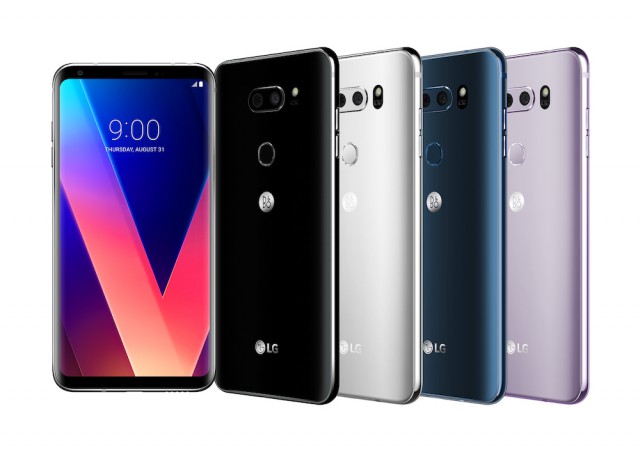 The G6 is a nice high-end smartphone, but it cannot hold its own against Apple's next iPhone and Samsung's Galaxy S8. LG's new V30, however, might just have what it takes to level the playing field.

LG is well aware that it cannot win a battle against the heavyweights in this market if it does not bring its A game, which is why the V30 comes with everything that you expect a flagship to have in this part of 2017 -- and more. It's actually the first LG-made flagship in years that I would want to buy.

The dual camera setup on the back features a 16MP sensor with an f/1.6 lens (a first on a smartphone) and a 13MP sensor with an f/1.9 lens. The former has a "standard" field of view, while the latter is a wide-angle. It should work great in low-light, based on those specs. On the front, the V30 comes with a 5MP camera, sporting an f/2.2 lens.

Optical image stabilization is included for the 16 MP sensor, and so are electronic image stabilization and hybrid autofocus. It features a glass lens on top, which is said to improve color accuracy and detail over a plastic lens. The 13 MP camera is better too, LG says, delivering less edge distortion than in the V30's predecessor, the V20.

There are two storage options to choose from. The base V30 comes with 64GB, but for those who need more space for their files there is also a V30+ available which bumps it up to 128GB. However, a microSD card slot is available on both.

Audio is an area of focus on the V30, as LG has equipped its new flagship with a Hi-Fi Quad DAC featuring B&O Play optimizations and B&O Play-branded earphones. It's also the first "global smartphone" to feature Master Quality Authenticated technology, which enables high-resolution audio streaming.

Of course, the V30 is IP68 water and dust-resistant, with LG claiming that it will work at a depth of up to 1.5m of water for up to 30 minutes. It also has Quick Charge 3.0 for fast battery charging, Gorilla Glass 5 on top of that wonderful screen, a fingerprint sensor and an always-on display.

On the software side, the V30 comes with Android 7.1.2 Nougat, which, admittedly, is not the latest version that you can get right now. That's Android 8.0 Oreo, which Google announced earlier this month. It remains to be seen when the V30 will get it. LG is not the fastest at delivering software updates.

There are some interesting add-ons here, as LG says that the Google Assistant on the V30 comes with some custom voice commands, like "OK Google, take a wide angle selfie" to default to the wide-angle camera in the camera app when taking photos and "OK Google, talk to LG to wash my clothes" to tell an LG-branded washing machine to start a program.

LG says that the V30 will be available starting September 21 in South Korea, followed by major markets in North America, Asia, Europe, Africa and the Middle East. The V30 with 64GB of storage will be offered in Aurora Black, Cloud Silver, Moroccan Blue and Lavender Violet. The 128GB model will be offered in a limited number of markets, LG says.

8 Responses to LG takes the wraps off V30 flagship