Audacity unveils new themed look along with other interface updates 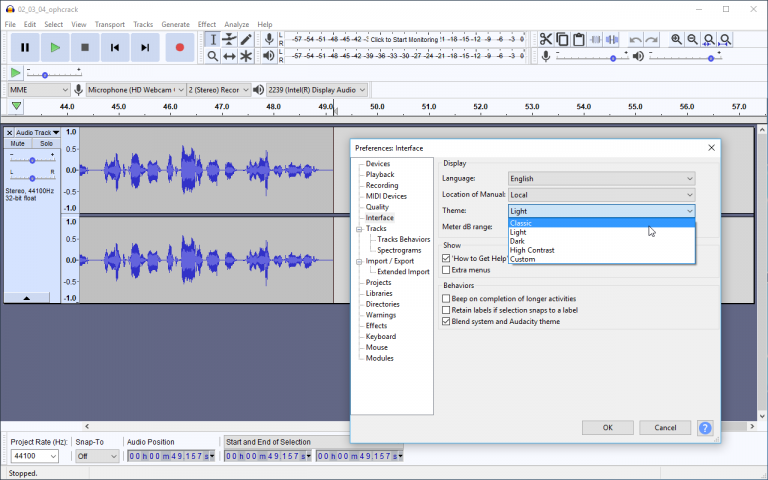 Open-source sound recording, editing and mixing tool Audacity 2.2.0 has been released for Windows, Mac and Linux, around two years after version 2.1.0 made its bow.

Version 2.2.0’s highlights include support for themes -- with a choice of four provided, plus reorganization of the program’s menus, additional help buttons and a major code overhaul.

Audacity opens with a significantly new look compared to the previous release -- by default, a new Light theme is set, with square buttons that attempt to emulate the flatter, more minimal look found on modern-day OSes. It’s more macOS than Windows 10, and if you don’t like it, going to Edit > Preferences > Interface and setting the Theme to Classic will bring back the old look and feel.

Alternatively, experiment with Dark and High Contrast variants on the theme, or choose the Custom option to implement your own, with an online guide available to skinning Audacity.

Elsewhere numerous menu changes have been implemented, including a new extended menu bar and keyboard commands for working with clips. There are also new preferences and preference pages.

Eagle-eyed users will spot a new context-sensitive Help button appearing in various locations including Preferences and Effects -- clicking this jumps to the correct online documentation page for that section. The online manual has been overhauled for easier navigation.

Users gain the ability to play back MIDI and Allegro files that are imported into Note Tracks, while the Selection Toolbar gains a centered option.

Other changes including making append the default setting for recording -- now users should hold [Shift] as they click Record to record on a new track.

The [Esc] key can now also be used to cancel all click-and-drag actions, plus chooses among overlapping mouse-click targets, particularly useful in the Multi-Tool.

The Sync-Lock button has been removed -- access this feature via the Tracks menu or by assigning a custom key via Edit > Preferences > Keyboard.

The program ships with a new logo and sees a major code overhaul, specifically under envelope handling and exception handling for greater security and to deal with several anomalies.

The update is rounded off by almost 200 bug fixes for both user interface and effects, but as with all new releases, a number of known issues remain -- see the release notes for details.

Audacity 2.2.0 is available now as a free, cross-platform download for Windows, Mac and Linux. A portable build of Audacity 2.1.3 is also available for Windows PCs -- this should be updated to the latest release shortly.