The space race is over and SpaceX won 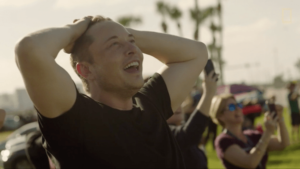 The U.S. Federal Communications Commission (FCC) recently gave SpaceX permission to build Starlink -- Elon Musk's version of satellite-based broadband Internet. The FCC specifically approved launching the first 4,425 of what will eventually total 11,925 satellites in orbit. To keep this license SpaceX has to launch at least 2,213 satellites within six years. The implications of this project are mind-boggling with the most important probably being that it will likely result in SpaceX crushing its space launch competitors, companies like Boeing and Lockheed Martin's United Launch Alliance (ULA) partnership as well as Jeff Bezos' Blue Origin.

Starlink is a hugely ambitious project. It isn't the first proposed Internet-in-the-sky. Back in the 1990s a Bill Gates-backed startup called Teledesic proposed to put 840 satellites in orbit to provide 10 megabit-per-second (mbps) broadband anywhere on Earth. Despite spending hundreds of millions, Teledesic was just ahead of its time, killed by a lack of cost-effective launch services. Twenty years later there are several Teledesic-like proposals, the most significant of which may be OneWeb -- variously 882 or 648 or 1972 satellites, depending who is talking, offering 50 mbps. OneWeb has raised more than $1 billion, found a launch partner in Arianespace and even broken ground on a satellite factory in Orlando, Florida.

While OneWeb is ambitious and looks like it will actually happen, Starlink kicks the whole idea up about 20 notches to one gigabit-per-second connectivity (two test satellites are already in orbit). And while OneWeb may thrive offering Internet service where there presently is none (third world countries and rural areas of first world countries) Starlink seems to want to compete head-to-head against the Verizons and Comcasts of the world.

Purely in terms of hardware in orbit, Starlink's minimal system of 2,213 satellites weighing 400 kilograms (kg) each will total 885,200 kg or just under two million pounds while OneWeb’s maximal system of 1972 satellites at 200 kg each will weigh 394,400 kg (867,870 lbs) -- just over a third as much. Clearly these projects are aiming at different customer bases.

IF Starlink is deployed, the most interesting effect will probably be on global satellite launch services rather than Internet. Right now there are just under 1300 operational satellites in orbit, yet Starlink is promising to launch at least 2,213 satellites within six years and more likely 4,425. This means launching 1-2 satellites per day.

In 2017 a total of 90 satellite launches were carried out by seven nations, which is an average of one every four days. So even the minimal Starlink system will require a massive expansion of global launch capacity, with 100 percent of that capacity coming from SpaceX, as Starlink’s owner.

SpaceX was already by far the price and volume leader in global launch services, but Starlink will kick the operation into an entirely new orbit.

But wait, there's a lot more to this than just a cheap ride to space. SpaceX is currently the only launcher that recovers and reuses its first stage rockets, powering them back to those spectacular automated landings on ocean barges or right back to the launch pad in Florida. This, too, makes SpaceX cheaper and gives them greater total capacity.

And capacity is the real name of the game here, because launching all those Starlink satellites will require SpaceX to dramatically expand the number of launches it will make each year. Extra launches drive down costs through more efficient utilization of ground facilities and economies of scale in building more reusable rockets.

SpaceX, which already costs less than half as much as an otherwise comparable ULA launch, is about to get even cheaper.

There is a side effect, too, of this greater launch frequency: it will change the very nature of the SpaceX business, making it less of a charter service and more like an airline.

Here is the comparison to keep in mind. Using ULA as a example, that company currently launches about one Atlas V rocket per month for a price of $150-200 million per launch. SpaceX presently does about three times as many launches for about half the ULA price, with most of those first rocket stages recovered and reused. Starlink demand should again triple SpaceX's number of launches to something like nine per month. The company will need primary payloads to cover much of that cost, so they will inevitably lower primary payload prices even further, taking business not just from ULA but from the Europeans, Russians, Chinese, Indians, Japanese -- you name it.

There will be a substantial change, too, in the terms of service for throwing larger payloads into orbit. Let's use that charter versus airline example again. Under the current system any company or agency that wants to launch a satellite generally starts spending money on launch services two years before they plan to actually have something in space. This is not all bad because it takes a long time just to build a satellite -- or used to. So the current business has customers putting 80 percent down two years before their launch -- a payment that begins construction of the launch vehicle that is used once then destroyed. So it's a one-way charter at best. Against this SpaceX will be launching (and recovering!) three rockets per week no matter what. It becomes a scheduled service, like an airline. And like an airline, it may no longer be necessary to book two years in advance.

It is going to be near impossible to compete with such a SpaceX system if you can’t match SpaceX scale -- a scale that will be driven primarily by Starlink (that is internal) demand.

The FCC is very unlikely to approve another constellation on the scale of Starlink, so for the next six years SpaceX will be protected from big competitors.

ULA will stay in business for national security payloads and some NASA business, but I can’t imagine their commercial business will survive. Blue Origin may get some business launching larger payloads with the huge New Glenn rocket they have in development, but unless Bezos comes up with his own demand generator like Starlink, it's unlikely he can keep pace

ULA will become an afterthought kept around by NASA and DoD mainly to avoid total dependence on SpaceX. How does Blue Origin find a place in this new landscape? SpaceX will need them to avoid anti-trust.

IF it works (and there’s no reason why it shouldn't) this one project turns SpaceX from a charter company into a scheduled carrier -- the ONLY scheduled carrier. With three reusable launches per week they'll undercut everyone else on both price AND service.

Keep this in mind: all Starlink has to do is break-even and maybe not even that because it will also be financing the SpaceX expansion.

This could be the endgame for traditional launch companies and with the FCC's recent action, that endgame may have already begun.

28 Responses to The space race is over and SpaceX won