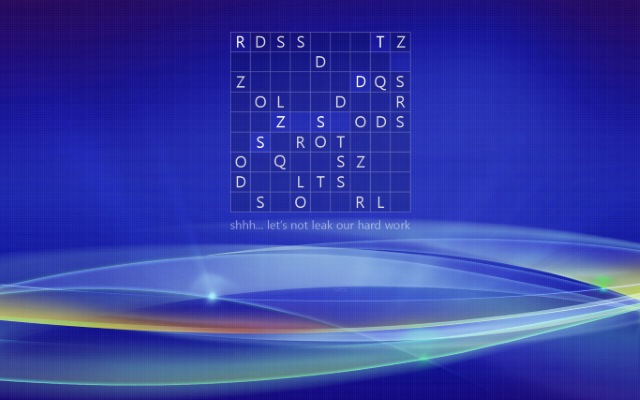 Microsoft developers working on Windows 8 created a puzzle and embedded it in the wallpapers used for internal builds of the operating system.

The team knew that the images would leak out to the public -- and probably the internal builds of Windows -- so they decided to have some fun with it. Over the course of numerous builds, the puzzle was developed -- but only one person ever solved it!

Over the weekend, Jensen Harris -- a former group program manager of Microsoft Office and Microsoft director leading the team working on the redesign of Windows 8 -- took to Twitter to come clean about the secret puzzle.

He explained that it was common for internal test builds of Windows to have wallpapers that were not intended for public release, but said that messages tended to be included to discourage leaking:

So early in Windows 8, we created a wallpaper that was a combination of the text the lawyers wanted us to use with an attempt to appeal to people's better nature...

...thus the "shhh... let's not leak our hard work" series of wallpapers was born. pic.twitter.com/FyWLfRfIcB

Legal guff is never very exciting so, as Harris said: "Of course, within days builds with this wallpaper leaked and, by that time, we had figured out how to hide certain features such that even though the builds leaked, the features themselves weren't there. So, knowing that the builds would still leak, we decided to make it fun."

The idea was to serialize a puzzle within the wallpapers:

We worked out a plan to progressively reveal it leading up to the first public beta, and decided we would wait and see how long it took someone to solve it.

The first version of the wallpaper was just green with a grid of letters. The grid (as a kind of easter egg) matched the typographic grid we were building into Windows (still in use today.)

We waited for the build to leak and once it did, were excited to see what people thought. pic.twitter.com/01aWL62cXM

Sure enough, the wallpaper leaked, but people seeing the puzzle thought it was a security feature that could be used to track the source of leaks. The team decided to turn the notch up a little:

Once this build leaked, we changed the wallpaper on the next set to continue revealing the puzzle.

To fuel the conspiracy theories, I used Photoshop to mess with some pixels in the grid towards the bottom of this wallpaper to represent that we had "embedded security" into it. pic.twitter.com/iCGLPoUTHA

In reality, it was just me messing with the image.

Interestingly, the "messed with" pixels represented the single biggest dip in pirated distribution of Windows betas we ever saw, as people spent time trying to ascertain what new security technology we were using to track them. pic.twitter.com/H2eHKjAHll

Harris does not say how many updates there were to the puzzle, but eventually we reach this stage:

Eventually, we got sick of the ugly green wallpaper and started using backgrounds that we had rejected from Windows 7 as the base wallpaper.

This version was, I believe, the last published version of the wallpaper and, thus, the easiest version of the puzzle to solve. pic.twitter.com/bQp3CiEiwq

But, despite months of the grid of letters on 1000's of PCs at Microsoft and pirated to who-knows-how-many computers outside, I am aware of only one person figuring out definitively that it was a puzzle and solving it.

A dev from Ireland solved it and sent us the answer in 2011.

If you're interested in the solution to the puzzle, check out this thread started today by Harris:

As I detailed a few days ago, there was a secret, unsolved puzzle quietly embedded into default Windows wallpapers.

It was misinterpreted as an advanced "anti-leak" security measure by many users, leading to all sorts of craziness.

I also promised you the solution. Here it is:

Did you know the puzzle at the time -- or even manage to solve it?