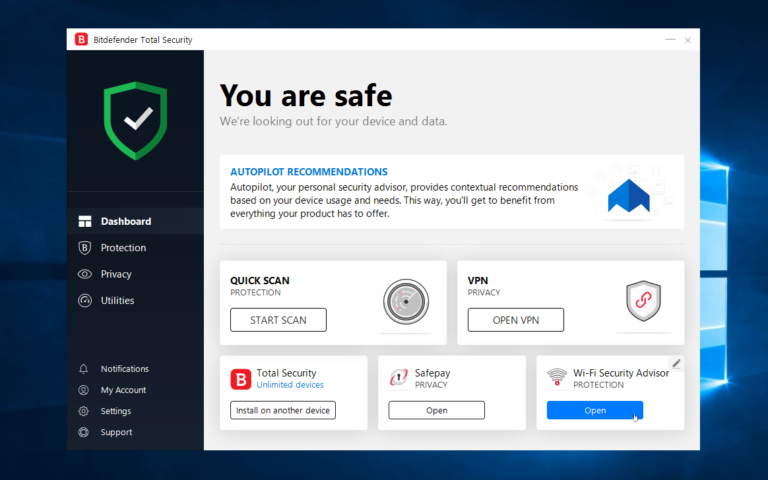 Bitdefender 2019 opens with Network Threat Prevention, which provides an in-depth system monitor to detect and block a wide range of attack types, from vulnerability exploits and brute-force attempts to spotting devices from being compromised by botnet attacks while keeping sensitive information away from unencrypted web forms.

The 2019 line also takes a more proactive approach to its autopilot technology, offering a Security Advisor that promises to alert users to ways in which they would benefit from additional security features.

Major improvements are also promised with the Advanced Threat Defense tool, which keeps a close eye on apps to quickly spot and shutdown suspicious behavior. The Web Attack Prevention module has also been enhanced to protect users from harmful websites while also providing screening for search engine results.

The 2019 range also sees the debut of a new licensing option: the Family Pack. This comprises Bitdefender Total Security 2019 and offers unlimited licenses to cover an entire household’s Windows PCs and Macs, plus iOS and Android mobile devices.

UK and EU users can take advantage of our Family Pack 2019 special offer in the Downloadcrew Software Store, which enables you to purchase a two-year Family Pack license for just £69.99 (€79.99), a saving of over 50 percent.

Bitdefender Total Security 2019, Bitdefender Internet Security 2019 and Bitdefender Antivirus Plus 2019 are all available for download as trial downloads for PCs running Windows 7 SP1 or later. Security applications for Mac, iOS and Android are also available and included in multi-device and Family Pack subscriptions.