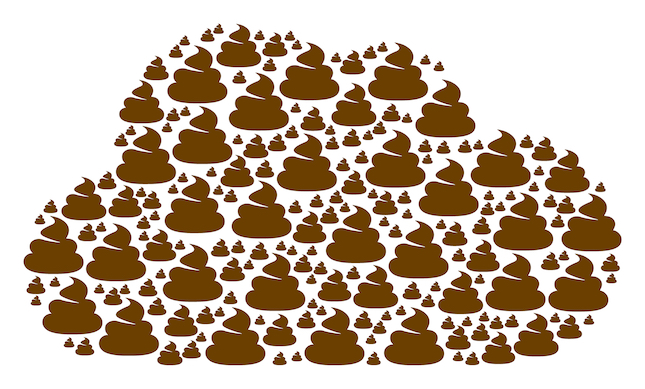 Cloud storage rules -- especially when coupled with a local backup plan. Quite frankly, it is one of the best computing innovations of all time. How cool is it that you can easily backup important files to an offsite location? Let's be honest -- before the cloud, many computer and smartphone users didn't bother backing up at all. While many still do not, the cloud has definitely improved the situation through convenience and affordability.

I have long been a proponent of the cross-platform Dropbox, as it has really been the only major cloud storage company to offer Linux support. Google, for example -- which uses the Linux kernel for both Android and Chrome OS -- shamefully never brought its Drive cloud storage platform to traditional desktop Linux. Unfortunately, Dropbox is suddenly making the cloud rain poop on Linux users. In a shocking turn of events, it is dropping support for most file systems.

On the surface it doesn't seem too bad because ext4 support will remain. This is the file system that many -- if not most -- desktop Linux installations use. Far fewer users are leveraging, say, Btrfs. The problem? Dropbox apparently won't support an encrypted ext4 volume either*. Woah. So, in other words, the company is essentially telling its Linux-based customers to disable encryption.

*UPDATE: Dropbox issues the following clarification to BetaNews on August 15, 2018.

While Dropbox will not support ecryptfs, it will support full disk encryption.

How about no, Dropbox? It is shocking and disturbing that a company which stores files would want customers to use poor security practices. I mean, how can you have confidence in Dropbox knowing it wants Linux users to not encrypt their drives? It is very upsetting.

Hi everyone, on Nov. 7, 2018, we’re ending support for Dropbox syncing to drives with certain uncommon file systems. The supported file systems are NTFS for Windows, HFS+ or APFS for Mac, and Ext4 for Linux.

A supported file system is required as Dropbox relies on extended attributes (X-attrs) to identify files in the Dropbox folder and keep them in sync. We will keep supporting only the most common file systems that support X-attrs, so we can ensure stability and a consistent experience.

Hopefully Dropbox reverses course and continues to support other Linux file systems -- such as Btrfs and XFS -- including ones that are encrypted. True, I suspect Dropbox doesn't make a huge profit from desktop Linux users. After all, they make up a miniscule amount of desktop computer usage share. Hell, if all desktop Linux users left Dropbox, the company's stock probably wouldn't dip in the slightest. But still, from a reputational aspect, it would be wise to keep this very loyal -- and vocal -- bunch happy.

Are you a desktop Linux user that relies on Dropbox? Will you be abandoning the cloud storage company? Please sound off in the comment below.