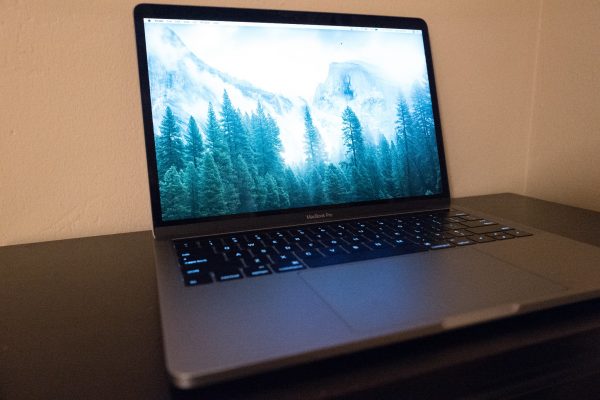 Yesterday, the local Apple Store emailed that my wife's former 13.3-inch MacBook Pro with Touch Bar was ready. We picked up the laptop hours later. If you haven't heard about specks of debris causing MBP keyboard failure, I can confirm from our experience that such problem occurs. In mid-June 2018, Apple initiated a free repair program, which we used last week with surprisingly positive results.

I purchased the custom-configured MBP in mid-November 2016, and right out of the box the spacebar occasionally skipped. The malfunctioning worsened over time, and, coincidentally (or not), reached crisis a few days after Apple admitted to problems with the Butterfly keyboard. The spacebar became stiff to touch, requiring considerable pressure to push, sometimes working but more often not.

Also coincidentally, my wife and I decided to abandoned Apple hardware and services for Google gear and cloud about a week earlier. How odd that the bum keyboard made her switching all that much easier. On June 7, 2018, I purchased the first of two Pixelbooks; Google offered a $250-promotional discount on the Intel Core i5 model with 8GB RAM and 128GB SSD. The MacBook Pro has a faster processor, twice the memory, and four times the storage.

I made a Genius Bar appointment a week ago today for August 22. On the twenty-first, I backed up all the data from the laptop and factory-refreshed the OS. The next afternoon, an Apple specialist told me that the repair could be completed in the store. First attempt would be the spacebar. If that wasn't resolution, the entire keyboard would be replaced.

But the repair was much more involved and rewarding, because of the computer's design. Apple techs did replace the keyboard, which also meant the entire top panel that also includes the palm rests, speaker grills, and trackpad as a single unit. Better still, I was told during the pickup that the battery is attached to the keyboard, making the repair a major hardware refresh—potentially increasing the resale value, too, or so I hope.

As I write, the laptop is posted on Craigslist but with no nibbles yet. If there are none in a day or so, I will likely keep the laptop for macOS Mojave testing and sell the 15-inch MacBook Pro with Touch Bar instead (it's a screamer with 2.7GHz Core i7 quad-processor, 16GB RAM, 2GB Radeon Pro 455 graphics, 512GB SSD). Surprising: How much more satisfied I am with the other Pixelbook (i7, 16GB, 512GB). By configuration, there is no comparison which laptop should be better. But user experience is sum of many attributes. While Chromebook can occasionally frustrate, and there are some application-task limitations, the "less is more" principle applies.

All that said, I commend Apple Store for giving more than promised with the repair—and for making a program available to fix problems for free. Still, no keyboard replacement should have been necessary. That, reportedly, particles as small as dust can cause Butterfly keyboard failure must be first and foremost regarded as a design failure. It's not the first, second, third, or even fourth time in recent years where some hardware problem emerged in a freshly redesigned Apple product. Now why is that?