I chose MacBook Pro with Touch Bar over Surface Book 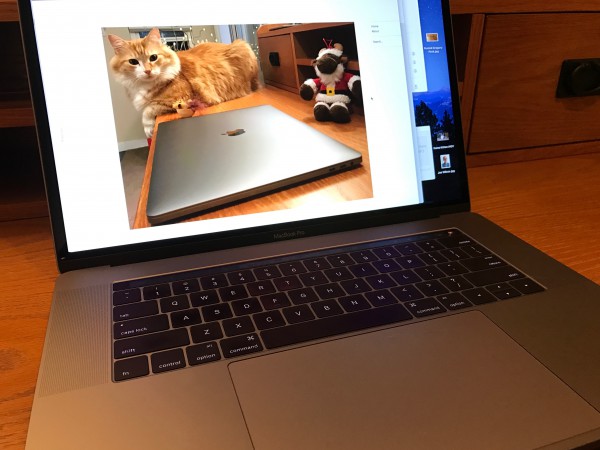 Water smacked the windshield -- a torrent of heavy droplets -- as my wife struggled to feed money into the tollbooth machine. Pelting rain is uncommon during November in San Diego, but we had purpose for driving 36 km through the downpour to Chula Vista and the Otay Ranch Apple Store, where I had never been before. The shop was the only one around that had the 15.4-inch MacBook Pro with Touch Bar in stock.

Eleven days earlier, Nov. 15, 2016, I received the 13.3-inch model that was ordered on October 27th. While first impressions were wow, the laptop felt slow compared to my previous MBP, and the battery drained in about half the time as specs stated. I worried that Apple produced a defective unit. No store in the area had the smaller laptop in stock, should I want to take advantage of the 14-day return policy. Deadline approached, so I considered as alternative my first 15-incher in more than a decade, tempted in part by quad-core processor and discreet graphics.

If Not One, The Other

Fast-forward to the present, briefly: In recent days I've seen some stories about shorter-than-expected MBP battery life; customers complain. Hardware is suspected (when isn't it in click-bait news stories). Following a fresh macOS Sierra install on the 13.3-inch laptop and transferring my wife's settings and software from an older MBP, battery life is workday-long-plus. Perhaps the computer had bad factory-installed image or, more likely, despite my sleuthing around for a culprit, something in my setup sucked CPU cycles and energy. (I did investigate!) So if your new MacBook Pro burns the candle quick, check the wick!

Returning to weltering November 26th, I stood over the larger MacBook Pro, in awe and despair. The thing felt fast -- almost mind-reading AI-fashion, anticipating keystrokes before I made them. But the screen was huge. Even 13.3 inches is larger than my preference; gimme a laptop that's easily grab-and-go.

But the longer time I spent touching and adjusting, perhaps 45 minutes, the more comfortable the laptop became. Decision: Understanding that the computer could be returned within 14 days and recognizing replacement MBP 13 order wouldn't ship, according to Apple Store online, for 4 weeks or more, I made the purchase.

My initial angst dissipated within hours after returning home and setting up MBP 15. I have no regrets.

I was surprised how the newer laptop seemed slower than the old. Granted, the comparison was i5 and i7, but also different generation Intel processors. If not MBP 15, I was ready to return the 13.3-incher for refund.

Considering how much I had already spent on the 13.3-inch MacBook Pro, a few extra hundred for a lot more computer wasn't a mental (or budgetary) stretch. But I would never spend so much without first experiencing the thing. Understanding: I would return the smaller notebook for refund. Hence, the rainy road trip.

Config: 2.7GHz Core i7 processor, 16GB RAM, 2GB Radeon Pro 455 graphics, 512GB SSD. The CPU is quad-core, and the difference is quite noticeable compared to MBP 13's dual-core processor. This beauty is a multi-tasking maven like nothing groped by my grubby paws. This also marks the most money I have spent on a laptop. Ever. The custom-configured 13-incher totaled $2,199,  and the larger $2,799.

By now you must wonder: "Why?" Well, it ain't for the Touch Bar, which isn't as useless as I expected. The brighter (500-nit), more color accurate screen checks one box.  More significantly, I've pined for Apple's butterfly keyboard since its debut on the 12-inch MacBook, which is way, way underpowered for my daily computing requirements. MBP 15 doesn't disappoint. Typing experience on the second-generation butterfly is absolutely fantastic. While the keys are noisy, they deliver great feel and responsiveness.

But in choosing to spend so much more, I also opted for other benefits: greater default, native screen resolution (2880 by 1800); quad-core processor; discreet graphics; and expansive, capable touchpad, among them.

Features are meaningless without benefits, and I have some in mind. In late October, I fully returned to work after a forced summer sabbatical related to eye surgery that lets me wear glasses to read but frees me from them for distance. I’m ready to write, write, write, and MacBook Pro with Touch Bar feels -- figuratively -- like the tool to do just that. I am doing more photography and video production, and producing a podcast.

I need a laptop that can keep up with several projects open and ongoing simultaneously, without stutters and stops that interrupt my workflow and more importantly disrupt my attention. I'm an older writer now, and interruption can leave a crater where my creative flow was.

The bigger screen, and even physical size, better suit my needs than the 13.3-incher. How strange; I thank Apple's supply shortages for putting me in position to challenge my preconceptions and go larger when the market trend is smaller laptops. The other mental barrier: Cost, as I couldn't have ever proactively conceived spending so much on a laptop -- and, honestly, wouldn't if not for bent-up desire to produce content following the summer sabbatical.

I feel happy typing on the new MBP, for its dazzling beauty and also for how the Touch Bar contextually changes depending on application or what I’m doing. (You’ll have to wait for my full review for more on the feature.) Joy is a benefit often overlooked by high-tech product designers.

Surely other laptops could do as much for the same cost, or even less. Yup, I seriously considered Surface Book, about which Microsoft's Brian Hall raved two days ago: "The innovation of Surface coupled with the disappointment of the new MacBook Pro -- especially among professionals -- is leading more and more people to make the switch to Surface". He then linked to PC Mag story "Why I Left macOS for a Surface Book", which begins "The Mac is in trouble".

Sascha Segan's experience with the butterfly keyboard differs from mine: "I just couldn't get with the super-flat keyboards. I pound out words all day, and getting rid of almost all the throw on the keys was pretty much a deal breaker". As I writer, I understand the sentiment but, as previously mentioned, have much different experience than does the PC Mag analyst.

There is much to like about Surface Book, which I see as the only meaningful competitor to either size MacBook Pro. The design is delightful eye candy, and the 3:2 screen ratio is much better suited to writing and researching content in a web browser (MBP is 16:10). Maximum resolution of the gorgeous 13.5-inch screen, which is fully touch-capable: 3000 by 2000 (MBP 13 is 2560 by 1600 and 2880 by 1800 for the larger).

Touch is a bonus if you need it, then there is the stylus. I'm a terrible artist and handwriter. I started using a typewriter at age 14 -- during the mid-1970s -- because my penmanship is so terrible. As such, the stylus has little appeal, while the touchscreen is a nice-to-have that I learned from using Chromebook Pixel and other Windows laptops isn't a necessity. For me.

As a middle-aged typist writer, keyboard matters much, and the MBP Touch Bar promises to expand what my fingers can do across the plane where they are constantly active. If I were another person, with different priorities and (artistic) capabilities, Surface Book might be the thing.

Apple offers one port-type on new MacBook Pros: USB Type-C (aka Thunderbolt 3), whereas Microsoft serves up the smorgasbord of connection options most people will want. Sixth-generation Intel Core chips are standard from both companies.

Surface Book pricing is similar or close between comparable configurations for either size MBP. That is when I purchased either. Microsoft is sale crazy during the holidays (don't ever expect deals from Apple). For example: $1999 for MBP 13 or SB with Core i5 processor, 8GB RAM, 512GB SSD. Of course, Microsoft serves up stylus and touchscreen instead of Apple's tiny Touch Bar -- and the display converts into a tablet (that is too large for my tastes). With i7 chip and double the RAM: $2,499 for the Apple and $2,699 for the Microsoft, but currently discounted to $2,299.

While screen sizes mis-match, here's Surface Book with Performance Base compared to MBP 15: Core i7, 16GB RAM, 512GB SSD -- both for $2,799. SB has touchscreen and stylus, but the MacBook Pro packs quad-core processor. For my needs, speed, professional graphics, and bigger screen matter more.

And something else that strangely is the opposite of Sascha Segan's deal-breaker: I find typing on the Surface Book keyboard troubling in manner similar to his complaints about MacBook Pro's butterfly; there's too much travel. Ha! Hey, this is why companies can compete: Different priorities and tastes among potential users.

Fanboys, don't get into a pissing match about which is better. Because both matter right now, and Microsoft gets good bang from the competition between them. Earlier today I asked Stephen Baker, NPD vice president and primary hardware analyst, about MacBook Pro and Surface Book sales. They are "key parts of the turnaround in the consumer PC market in terms of pointing it in a more premium direction", he says. "While they aren’t the share leaders, the advertising being spent and the marketing have helped lift all the Windows boats—and it of course hasn’t hurt that all the Windows brands have stepped up their premium product development".

Wrapping up, the best laptop is the one with the benefits that matter most to you. That's how I came to choose 15.4-inch MacBook Pro -- and love it.

Hehe. Who knows, maybe in an alternate universe, heavy rains led my wife and I to drive to closer-distance Fashion Valley Mall, where there is Microsoft Store, inside which an irresistible Surface Book offer hypnotized me.

Author's Note: The original, but discarded, click-bait headline was "Ménage à trois! I shacked up with MacBook Pro and Touch Bar".