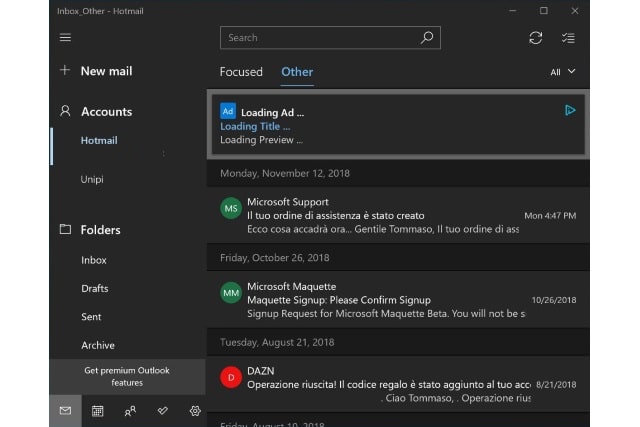 Ads in your inbox. Sounds like something you'd expect from the likes of Google or Yahoo, but Microsoft appears to be about to get in on the act as well.

And we're not talking about online ads in your Outlook.com account -- we're talking about ads in the Mail app that's included with Windows 10. A new report says that Microsoft is currently testing ads with Windows Insiders, so it could be just a matter of time before they spread wider.

The news comes courtesy of Italian blog Aggiornamenti Lumia which says (thanks, Google Translate) that Windows Insiders on the Fast Ring are now being treated to personalized banner ads in the Mail app. The ads appear at the top of the inbox and will be shown to anyone using Mail regardless of their choice of email provider.

Bad news: Mail for #Windows10 is getting ads for non-office 365 subscribers! https://t.co/xDELzAClJq pic.twitter.com/gXkQXab5Wr

A descriptive pop-up in the app explains:

There is a way to avoid the ads, however -- other than just not using the Mail app, of course. Pay for an Office 365 subscription, and you can continue to enjoy an ad-free experience.

What do you make of this?

Update: Microsoft claims this feature was just an experiment...

This was an experimental feature that was never intended to be tested broadly and it is being turned off.