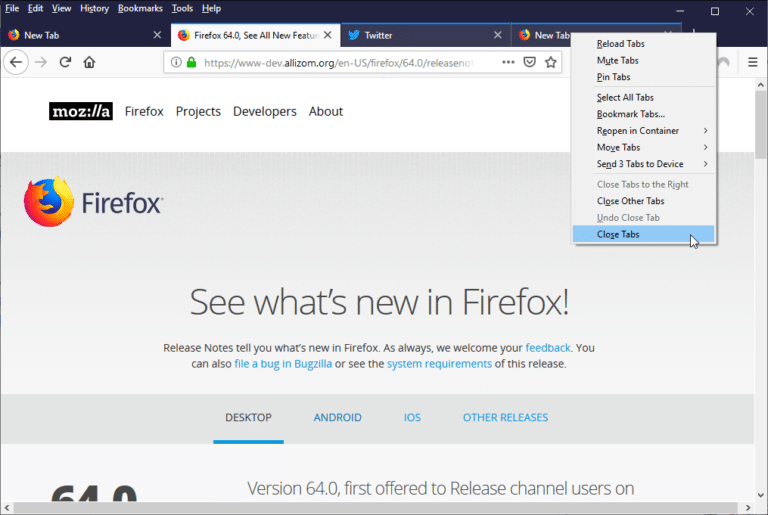 With the news that Microsoft Edge will be ditching its own browser engine in favor of Google’s Chromium, those wishing to strike a blow against monopolization the net should be looking at Mozilla’s Firefox, which continues to develop its own independent Gecko engine. Firefox Quantum 64.0 has just been released for desktop, along with Firefox for Android 64.0.

Mozilla has made its own pitch for why the news about Edge could be bad for the wider net, but in the meantime Firefox 64.0 delivers a smattering of new features, and various other changes.

US users will start to see more suggestions in regular browsing mode for how better to utilize new and relevant Firefox features, services and extensions based on their use of the browser.

All users gain additional control over tabs thanks to the ability to now select multiple tabs via the tab bar: just hold [Ctrl] as you click to select each tab, then close, move, bookmark or pin them all in one move.

A new Task Manager page has been added -- accessible via about:performance, it allows users to monitor energy usage on a tab-by-tab basis, plus view underlying processes in each tab and allow users to close tabs directly from the page.

Mac and Linux users gain the same performance improvements rolled out to Windows in Firefox 63 through the enabling of link-time optimization. Windows users meanwhile can now share pages using Windows’ own native sharing tools via the Page Actions > Share menu.

Native support for RSS feed previews and live bookmarks has been dropped in Firefox 64 -- users now require third-party addons. Existing live bookmarks have been exported to an OPML file on the desktop.

As forewarned previously, TLS certificates issued by Symantec are no longer trusted by Firefox. Other changes include a redesigned about:crashes page to make it clearer when a crash report is being submitted to Mozilla; Mac users will find they must now press Crtl-Enter to add 'www.' and '.com' shortcuts to URLs.

Developer changes include the ability to overlay up to three CSS grids at one time in the CSS Grid Inspector, added support for the new CSS scrollbar spec and support for WebVR on MacOS.

Android users should find scrolling is faster and more responsive, while there are fixes for deleting downloads after uninstalling Firefox, performance lags with third-party password manager apps and an issue whereby the loading indicator consumed too much CPU and energy.

Firefox Quantum 64.0 and Firefox for Android 64.0 are both available now as a free, open-source download for supported versions of Windows, Mac, Linux and Android.