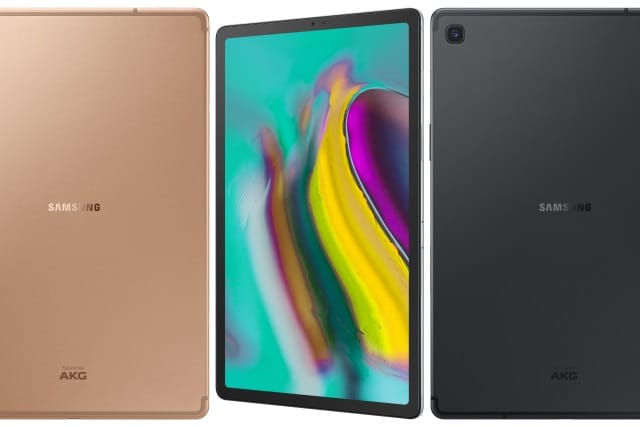 Samsung may be on the verge of officially unveiling its Galaxy S10 range of phones, but ahead of this the company announces its Galaxy Tab S5e tablet.

Being thin and light, there's a strong focus on portability here, and the display makes it perfect for movie watching. This is a 10.5-inch Super AMOLED screen with a 16:10 aspect ratio, and the bezels have been stripped right back. The tablet is driven by a Qualcomm Snapdragon 670 processor, comes with up to 6GB of RAM, and pricing starts at $400 -- which compares well with Apple's iPad.

As well as cutting back the bezels, Samsung has kept the weight way down at 400g, and the tablet is a mere 5.5mm thick. With a metal body, this is a robust device designed for traveling with. The Galaxy Tab S5e has a 7,040mAh battery which Samsung says should provide up to 14.5 hours of usage. Two models will be available upon launch: one with 4GB of RAM and 64GB of storage, and another with 6GB of RAM and 128GB of storage. Both can be expanded with a 512GB microSD card.

As well as entertainment, Samsung is looking to push this as a jack-of-all-trades tablet:

The Tab S5e allows you to take complete control of your connected world. As the first Samsung tablet to feature the new Bixby 2.0, the Tab S5e offers a smarter and more convenient way to interact with your device, and serves as an ideal hub to control your connected home devices. Switch on your TV and your lights at the same time with Quick Command, which allows you to customize several actions under one command -- making voice control of your home environment even quicker, simpler and more tailored to you.

When you need to get things done, a keyboard (sold separately) coupled with Samsung DeX gives you a PC-like environment. With call and message continuity, you can also answer a call or reply to a message directly from your tablet -- even when your phone is far from reach, or on a different Wi-Fi network.

Check out the tablet in the video below:

Here are the specs for the Samsung Galaxy Tab S5e:

The Samsung Galaxy Tab S5e is scheduled for release in the US, Germany and other countries from 2Q 2019. Find out more over on the Samsung website.