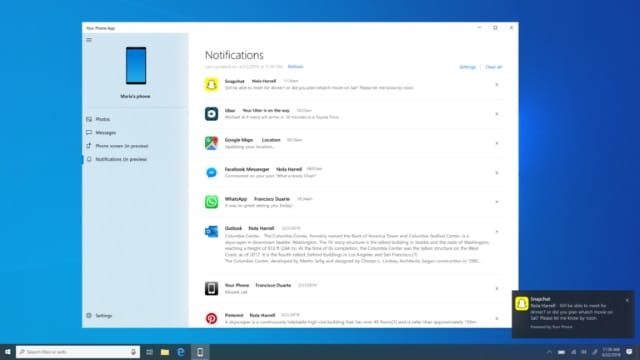 Microsoft has released Windows 10 Insider Preview Build 18885 (or Windows 10 20H1, if you prefer) to the Fast Ring. The big addition in this latest build is Android notification mirroring in Windows via the Your Phone app.

If you have an Android 7.0 handset, you can (probably, barring handset-specific compatibility issues) take advantage of the ability to see phone notifications in Windows 10. The range of phones that can use the "phone screen" screen mirroring option has been expanded as well. With Build 18885, Microsoft has also addressed the problem that was preventing people from installing updates when they had a USB drive or SD card connected.

The growing capabilities of the Your Phone app mean that it is possible to see notifications from your Android phone within Windows 10. The notifications that pop up on your phone will also appear on your desktop and in the Action Center, so you can keep up to date with everything that's going on without needing to jump from screen to screen.

Writing about the update in a blog post, Microsoft's Dona Sarkar and Brandon LeBlanc say:

Today, we are excited to provide a preview into the newest feature for the Your Phone app -- Notifications.

Stop reaching for your phone to check your notifications. Boost your focus and productivity by seeing your phone’s notifications on your PC. You are in control and manage which apps you want to receive notifications from. Dismiss a notification on one device and it goes away on the other.

With this preview, you can:

This feature will gradually roll out to Insiders on 19H1 builds. It may take a few days for this feature to show up inside the Your Phone app.

You can use the Your Phone app on any Windows 10 PC running Windows builds 1803 (RS4) or newer and most Android phones running Android version 7.0 or newer.

Of the problem that required people to remove their USB drives and SD cards to avoid issues, Microsoft says: "We fixed an issue that could result in USBs and SD cards being unexpectedly assigned a different drive letter after upgrading".

Here's the full list of changes, additions and known issues: