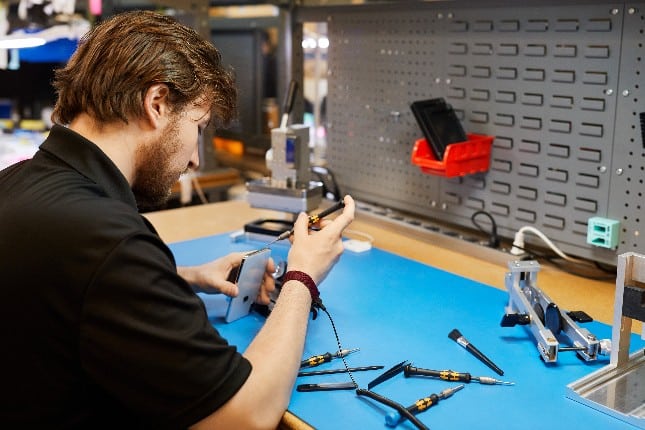 Apple products are very elegantly designed, but they aren't known for being durable, nor are they free from defects. For instance, my iPhone 8 Plus had dead pixels out of the box -- I had to get a screen fix immediately. Later, my MacBook Pro -- which I have since sold -- developed a screen defect on its own. There are countless people that have dropped their Apple devices too (even from low heights) and had the the damn thing break. Apple stuff can be rather fragile.

So, yeah, owning an Apple product means you sometimes have to visit the Apple Store to get it fixed. If you don't have Apple Care, however, and the phone is out of warranty, it can be a very expensive affair. Not to mention, many people don't live near a physical Apple Store. So to either save money or because of geographic purposes, they turn to third-party repair services.

Now, I do not recommend doing this unless you are desperate. It is always better to have Apple repair your device. Why? Well, for one, do you really want to trust your expensive device to some guy in a mall kiosk or a random shop? But also, right or wrong, Apple has a tendency to frown upon unauthorized repairs and use of third-party parts. There have been situations where iPhone smartphones don't work as a result following an iOS update. Most recently, the company blocked its battery stats feature when an unofficial battery is detected. Ultimately, dealing with Apple directly should save you some grief.

"Over the past year, Apple has launched a successful pilot with 20 independent repair businesses in North America, Europe and Asia who are currently offering genuine parts for repairs. Today's announcement follows Apple's recent major expansion of its authorized service network into every Best Buy store in the US, tripling the number of US AASP locations compared to three years ago," says Apple.

The company further says, "There is no cost to join Apple's independent repair program. To qualify for the new program, businesses need to have an Apple-certified technician who can perform the repairs. The process for certification is simple and free of charge. Qualifying repair businesses will receive Apple-genuine parts, tools, training, repair manuals and diagnostics at the same cost as AASPs."

To better meet our customers' needs, we're making it easier for independent providers across the US to tap into the same resources as our Apple Authorized Service Provider network. When a repair is needed, a customer should have confidence the repair is done right. We believe the safest and most reliable repair is one handled by a trained technician using genuine parts that have been properly engineered and rigorously tested.

While it is cool that this program doesn't cost anything, many shops do not have the required Apple-certified technician. In other words, it is a bit disingenuous to imply getting approved is a walk in the park for small shops. Oh well. At least some shops and their customers should see a benefit from this program. Me? I’ll stick to the Apple Store, thank you very much.