Star Wars: The Rise of Skywalker lands in Facebook Messenger 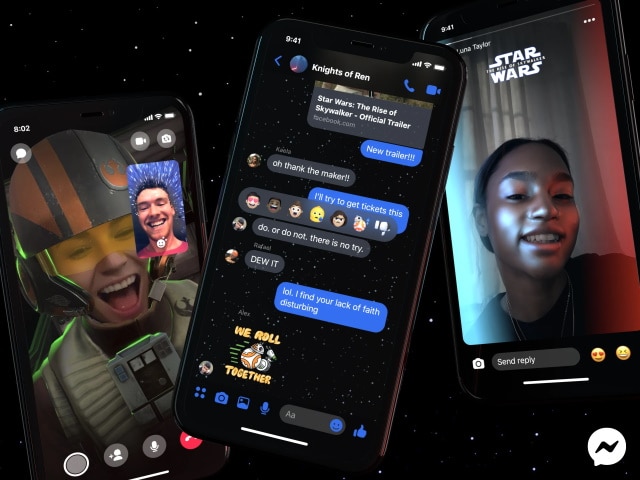 It's that time of year again: time for a new Star Wars movie. Inevitably, this means there is lots of marketing and a lot of tie-ins, and Facebook is never one to miss out on a trend.

Star Wars: The Rise of Skywalker  is here, and as such Facebook Messenger is getting something of a Star Wars makeover, with new themes, reactions, stickers and augmented reality effects. Facebook says that they are "limited-edition Messenger features" -- so move quickly, you must.

The new Messenger features come as a result of Facebook working with Disney, and it gives users the chance to express themselves using characters from both sides of the Force. It's all good fun and a great way to celebrate the release of the final instalment in the Skywalker saga.

In addition to stickers and a theme (which you can access by tapping the name at the top of a message thread and selecting the theme option), there are also augmented reality effects which you can use to enhance your chats. Facebook says:

We've also teamed up with Disney to create limited-edition AR effects that will have you feeling like you're a part of the galactic action when you're making Messenger video calls and taking photos using the Messenger camera. First, jump into hyperspace and travel to a whole new world with the Lightspeed Effect. Then, you’ll be able to see yourself as part of the Resistance, gliding through the galaxies in Poe Dameron's X-Wing with the Cockpit Effect. And don’t forget about the battle of the Dark vs. Light side of the Force! Now, you can use the Dark vs. Light Effect to choose your side.

4 Responses to Star Wars: The Rise of Skywalker lands in Facebook Messenger