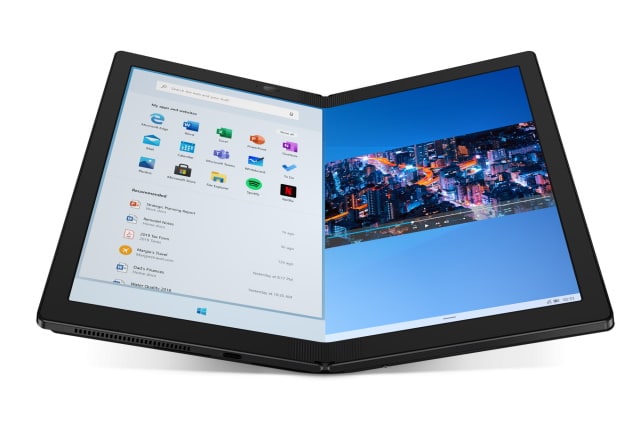 So far -- as Samsung will attest -- folding devices have been a bit of a disaster, but Lenovo thinks it has got things nailed with its ThinkPad X1 Fold which it officially revealed at CES.

Due for release in mid-2020, the "world's first foldable PC" features a 13.3-inch folded OLED and Lenovo says it delivers "laptop efficiency with smartphone portability". The device will initially ship with Windows 10, but a Windows 10X version will follow. A 5G version will also be available. Lenovo envisions its device being used in a variety of ways, but the only sticking point may be the price.

This is not the first we've heard of the ThinkPad X1 Fold; Lenovo teased us with snippets of information in the first half of last year. But now the device is -- almost -- ready for primetime. Opened up flat, it can be used as a traditional tablet, but it can also be used in conjunction with the bundled Bluetooth keyboard and optional ThinkPad X1 Fold Stand as more of a traditional PC.

Folded at the hinge, the ThinkPad X1 Fold can be viewed like a book, or used like a laptop with an on-screen keyboard on the lower portion of the display. The Bluetooth keyboard can also be snapped onto magnetic anchors on the lower display for a better typing experience.

In terms of specs, the display is a 4:3, 2048x1536, 300-nit OLED, and the device is powered by a 50Wh battery which Lenovo claims will deliver 11 hours of usage. The CPU is an unspecified "Intel Core Processor with Intel Hybrid Technology", and Lenovo says that the device weighs in at under 1kg (2.2lbs).

The expected starting price is $2,499 which seems like quite a lot, but the high price tag of the Samsung Galaxy Fold didn't seem to serve as a deterrent.