I'm Ronnie Kray -- which notorious mobster are you? 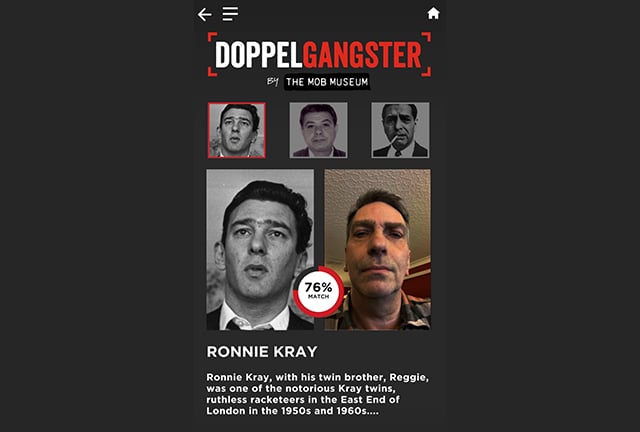 Las Vegas’ National Museum of Organized Crime and Law Enforcement (aka The Mob Museum) has launched a new smartphone app (a mob-ile app, if you will).

The app aims to provide the ultimate guide to the museum, delivering information on the history of the Mob and law enforcement. The main point of interest for users though will no doubt be its Doppelgangster feature, which lets you find out who from the mob world you most look like.

Doppelgangster compares a user’s facial features with a database of more than 800 images spanning from "notable heroes, villains, singers, comedians and entertainers" -- as well as many others from the Mob world -- to identify your closest match. Narrow the options down by male, female or both, and then take a selfie -- this image never leaves your device.

I tried it three times, and each time it matched me with notorious London gangster Ronnie Kray. I'm not sure I can see the similarity, but the app claimed a 76 percent match so who am I to argue?

In addition to the Doppelgangster feature, the app offers:

"This app enhances the Museum experience for our guests, allowing them to engage with us before, during and after their visit," explains Jonathan Ullman, president and chief executive officer, The Mob Museum. "It gives guests new ways to make the most out of their visit while onsite and allows us to build better relationships with people who aren’t physically at the Museum. We now have another option to connect with those who are interested in our content or in our mission of advancing the public’s understanding of organized crime and law enforcement."

The app is free for Android and iOS and can be downloaded from here.