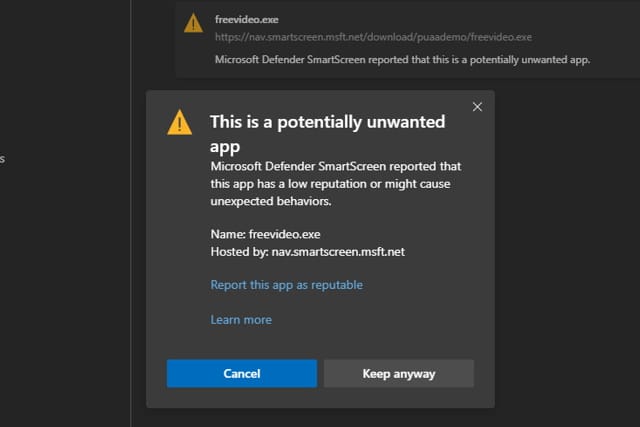 With the switch to the Chromium engine, there's a lot more to like about Microsoft Edge these days. Microsoft is now pushing the browser hard, with the promise of serious speed improvements being used as a lure.

The latest update offers something extra -- protection against potentially unwanted applications (PUA). Microsoft Edge will now step in and block adware, cryptocurrency miners and other unwanted nonsense, particularly when downloading free software. The Microsoft Edge Team explains how to get the most from the protection.

Somewhat strangely, PUA protection can be found in Microsoft Edge 80.0.338.0 and later, but it's not enabled by default -- but you can easily turn it on:

Microsoft has published documentation to explain how it identifies malware and PUAs, and it is possible to override a block if you feel a download is safe. Microsoft says:

If an app has been mislabeled as PUA, users can choose to keep it by tapping … in the bottom bar, choosing Keep, and then choosing Keep anyway in the dialog that appears.

There is also another way to let Microsoft know that you feel an app is safe:

From edge://downloads/, users can also choose Report this app as reputable, which will direct them to our feedback site. There, users can let us know that they think the app is mistakenly marked as PUA.

9 Responses to Updated Microsoft Edge will protect you from malware, crypto miners and more