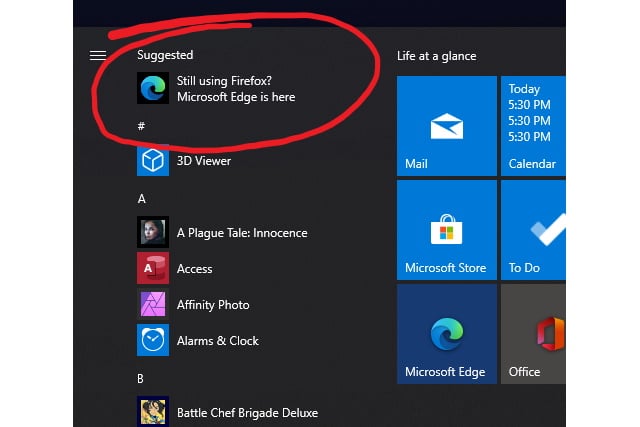 Microsoft recently released the Chromium-based version of its Edge browser, and now the company seems to be on an all-out offensive to promote it.

Ads have started to appear in Windows 10's Start menu suggesting that Firefox users should try Microsoft Edge instead. This is not the first time the Start menu has been used by Microsoft to promote software, and it's a move that is likely to win the company a few enemies.

As noted in a thread on Reddit, Microsoft is using the "suggestions" section at the top of the Start menu to encourage people to give Edge a try. The ad (or suggestion) specifically targets people using Firefox, saying: "Still using Firefox? Microsoft Edge is here". Clicking the message takes users to the download for the Chromium-based version of Edge.

These sorts of suggestions are controlled by Start menu personalization settings, and they have caused upset and irritation in the past. If you want to stop seeing such promotions, just head to Settings > Personalization > and disable the setting labeled "Start Show suggestions occasionally in Start".

At the moment, it seems that Microsoft is only interested in encouraging people to switch from Firefox to Edge, but it's possible that other browsers will be targeted in the future.