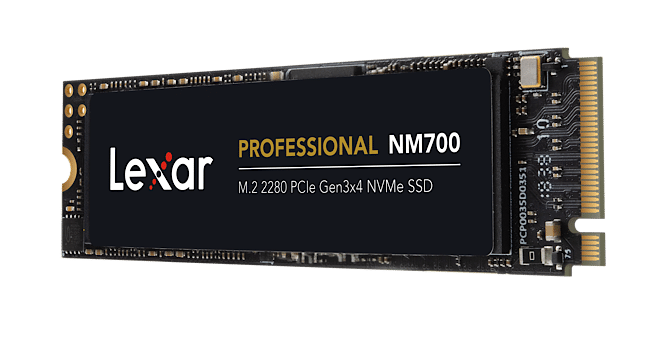 There is no shortage of news about solid state drives these days, with many new models being announced from popular manufacturers like ADATA, Samsung, and Kingston, to name a few. This includes both SATA and PCIe-based internal SSDs, plus external models that interface by USB and Thunderbolt 3.

Today, Lexar unveils an all-new solid state drive for professionals, although home consumers can obviously use it as well. Called “NM700,” it is an M.2 2280 PCIe Gen3x4 NVMe SSD with impressive performance.

“As the need for faster performance and uninterrupted application experiences increases, Lexar has developed a solution to keep videographers, photographers, and designers in the driver’s seat with speeds of up 3500MB/s read, and 2000MB/s write. The NM700 is supported by PCIe Gen3x4 NVMe and built with 3D NAND flash for higher capacity and more efficiency without unnecessary slowdowns,” says Lexar.

Joel Boquiren, Director of Global Marketing explains, “The Lexar Professional NM700 allows our high-intensive users to experience improved performance with speeds that will keep them in front of any task. This new SSD solidifies our commitment to improving our SSD portfolio and meets the demands of our customers’ needs.”