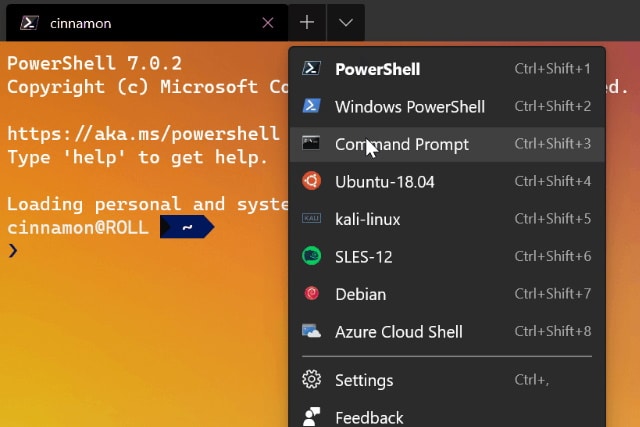 It's only a month since Microsoft released the first completed version of Windows Terminal and just a week since the company published its roadmap for Terminal 2.0. Starting the journey towards version 2, a preview version Windows Terminal 1.1 is now available.

While this is only a x.1 version increase, Microsoft has actually added quite a lot to the utility with this update. In keeping with Microsoft's release schedule, assuming no problems crop up, all of the features found in this preview release will migrate to the main release version next month. So what is there to look forward to? Highlights include the ability to rename tabs, and support for a new batch of command line arguments.

But it doesn't end there. For anyone who lives in Terminal day in, day out, there's a new option to have the app start automatically with Windows. To help with both aesthetics and ease of use, there is support for font weights as a new profile setting, and a new color picker has been added to the right-click menu of tabs, making it easy to grab hex codes or RGB values.

Alt+Click to open a pane

If you'd like to open a profile from the dropdown menu as a pane in the current window, you can click on it while holding Alt. This will open that profile in a pane by using the auto split feature, which will split the active window or pane across the longest length.

In the same context menu where the color picker lives, we have added a tab rename option. Clicking this will change your tab title into a text box, where you can rename your tab for that terminal session.

Thanks to WinUI 2.4, we have added compact tab sizing as an option for the tabs in the tabWidthMode global setting. This will shrink every inactive tab to the width of the icon, leaving the active tab more space to display its full title.

We have added some additional commands to use as arguments when calling wt from the command line. The first is --maximized, -M, which will launch Windows Terminal as maximized. The second is --fullscreen, -F, which launches Windows Terminal as full screen. These two commands cannot be combined.

The last is --title, which allows you to customize the title of the tab before launching Windows Terminal. This behaves just like the tabTitle profile setting.

Open defaults.json with the keyboard

There are also numerous bug fixes.

Windows Terminal Preview 1.1 is available to download from the Microsoft Store or from the GitHub releases page.