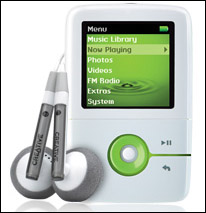 Struggling electronics maker Creative pressed on late Tuesday, introducing the Creative Zen V Plus, its latest music and video player. The device is small enough to fit in the coin pocket of a pair of jeans, and includes a 1.5-inch color OLED screen.

The Zen V Plus is also PlaysForSure compatible, meaning it supports subscription music services. The player also includes a line-in port for direct recording from audio devices and FM radio, and a voice recording feature.

"We developed the Zen V Plus with a look and a user experience that create the true feeling of Zen," Creative chairman and CEO Sim Wong Hoo said. "Photos and videos and our patented Zen user interface look so vivid on the stunning color screen and the sound quality is awesome; it's surprising for such a tiny player."

In addition, Creative has also made available a model called the Zen V. The lower-end player does not have video or FM radio support. Both Zen V models come in 1GB, 2GB and 4GB capacities.

The Zen V is expected to be released in July, with the Zen V Plus following in August, Creative said. Additionally, Creative plans to make accessories including cases, skins and power adapters available in July as well.