How should Microsoft open the curtains on Windows Phone 7? 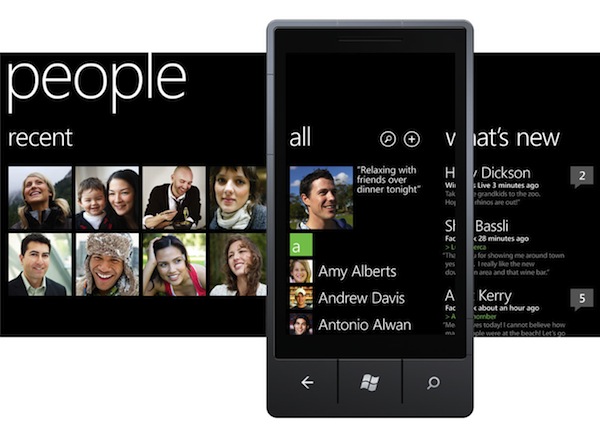 Microsoft's launch of Windows Phone 7 is a turning point for the company. Either Microsoft will turn back to its enterprise applications stack past or turn a page that opens a new chapter for future expansion. Should Microsoft fail to deftly execute, its computing and informational relevance will likely decline, much like IBM in the 1980s and 1990s. Windows Phone 7 is Microsoft's IBM PC moment, but the course doesn't have to be the same as Big Blue three decades ago. Much depends on Microsoft marketing and how much the company embraces the cloud connected mobile device applications stack rather than clings to the Office-Windows-Windows Server app stack.

Microsoft CEO Steve Ballmer officiated today's Windows Phone 7 launch in New York. The locale was meant to reassure Wall Street that Microsoft has a viable and even winning mobile strategy. Ballmer asserted that Microsoft "built a different kind of phone." He said that Windows Phone 7 isn't so much about what users are going to do with the phone but how they're going to do it. Windows Phone 7 will be available on "nine different phones" when WP7 "ships here in the United States in November." Official device availability is November 8th. Windows Phone 7 handsets will be available from operators in 30 countries, making the phones "wonderfully mine," Ballmer asserted. Microsoft's marketing position: Windows Phone 7 is a "fresh start for the smartphone." But is it a fresh start for Microsoft mobile? Ballmer obviously took the position of yes.

Ballmer is a little bit wishful thinker and pragmatist. As the wishful thinker, he bucks against analyst projections, which are downright gloomy for Windows Phone. Gartner predicts that Microsoft's global share of mobile operating systems will fall from 8.7 percent last year to 3.9 percent in 2014, or sixth ranked, behind "other." Meanwhile, during the same time period, Android is forecast to grow from 3.9 percent to 29.6 percent market share. From the wishful thinking viewpoint, Microsoft has fallen too far behind to ever recover lost dominance.

But from the pragmatic perspective, anything can seemingly happen yet in mobile. As recently as 2005, Microsoft and Nokia were mobile OS market share leaders. During 2006-07, Microsoft felt the pinch of Research in Motion, which BlackBerry smartphone had already lapped up many corporate users. Then in June 2007 came iPhone from Apple, which was absolutely inexperienced manufacturing or distributing cell phones. The first Android phone, the G1, debuted on T-Mobile in October 2008. Gartner projects that Android shipments will top 47 million this year, ahead of BlackBerry OS and Apple's iOS. The point: Microsoft's mobile fortunes fell relatively fast in a rapidly and dynamically changing market. They could yet recover with the right execution.

Which Path Should Microsoft Take?

Microsoft is caught between two possible paths, and I contend that Windows Phone must go down both rather than one or the other. Down the one path, retrenchment to the Office-Windows-Windows Server applications stack, is certain doom. Down the other -- expansion to the cloud connected mobile device apps stack -- Microsoft trails far behind upstarts Apple and Google, and that's discounting Nokia and RIM as still strong market share contenders. Microsoft must embrace the new applications stack while leaping from the other, all the while resisting the temptation to fall back and solely rely on its enterprise strengths.

Microsoft's problem is simple: Computing relevance is shifting to the cloud connected mobile device from the personal computer, much as it did from the mainframe to the PC in 1980s and 1990s. IBM embraced the PC as an adjunct to the mainframe, failing to recognize or respond to the changes in computational and informational relevance. IBM's priority remained the mainframe, for good reason. It was a lucrative business. Microsoft's position is similar with the PC.

In 1981, when IBM launched its branded personal computer, the company cautiously embraced the new platform. Big Blue generated huge gobs of cash from its enormous mainframe customer base. This success made IBM cautious and slow-moving dealing with the PC platform, in part because executives feared losing customers and massive mainframe revenues. By comparison, young Microsoft, with fewer customers, could take bold risks. Three decades later, Microsoft has built up huge infrastructure and customers around its hugely successful Office-Windows-Windows Server applications stack.

So far in mobile, Microsoft has been adverse to taking the kind of risks necessary to embrace the cloud connected mobile device apps stack, instead clinging to its enterprise strengths. Any Betanews commenter who asserts otherwise needs look no further than Microsoft's failure in mobile, which is indisputable and to date almost entirely is focused on businesses using the company's software. It surprises me that Microsoft hasn't seen the risk of tying its mobile strategy to the past. Microsoft's main business is about reselling to the same customers, much the same as IBM did 30 years ago. The parallels are simply obvious.

Three attributes defined the PC's success against the mainframe:

These same attributes apply to the cell phone in relationship to the PC and in some ways more strongly. The cloud and mobile device lets users access their data anytime and anywhere and extends computational and informational utility to more people and places at lower costs. In an early August US State Department presentation, "[email protected]: Mobile Money and Financial Inclusion," Maria Otero, Under Secretary of State for Democracy and Global Affairs, observed that about 5 billion of the planet's 6.6 billion people have cell phones. By comparison, analyst estimates put the entire install base of PCs at about 1 billion units.

The PC era is waning. Mobile devices, particularly cell phones, are even more personal and increasingly much more powerful and useful than PCs. People carry cell phones most everywhere and use them to maintain personal and professional relationships. The smartphone's smarts only make the device more personal, as people manage e-mail, financial accounts, music, personal communications, photos and videos, among other things. PCs are personal, too, but not nearly as much. How many people are so attached to their PCs they want to be buried with them? But people want to be buried with their cell phones. I wrote about this phenom in March 2006 post "From (Docking) Cradle to the Grave." Last week, Gizmodo reported that actor Tony Curtis was buried with his iPhone.

How personal Microsoft and its hardware and carrier partners make the Windows Phone 7 experience is hugely important. How well they sell the experience -- through inventive and aggressive advertising and marketing -- is as important. Years ago, Microsoft marketers pushed products Office and Windows, among others, for their converged home and work capabilities. The marketing recognized that people often use the same tech gear for personal and professional purposes. This is more true with mobile devices, such as PDAs and cell phones, than most any other product category. Microsoft's challenge: To make Windows Phone 7 personal for home and work uses.

The company hinted at some of this marketing positioning during today's launch event Windows Phone 7 demo, which shifted from personal activities like gaming to work tasks like note taking. Ballmer succinctly stated that Windows Phone 7 is designed so that people can "get in, out and back to life." It's savvy marketing, but what if the phone is your life, as it is for many Millennials? The Windows Phone 7 TV commercial embedded above uses the same marketing line while showing people obsessed by their WP7 devices. They get in, but they don't get out. It's marketing messaging contradiction.

Microsoft Doesn't Have to be IBM

As previously stated, Microsoft will continue to fail in mobile if retrenching along the enterprise customer base. IBM chose this path in the 1980s. IBM and the mainframe didn't go away, their computational and informational relevance merely diminished before the PC. The PC's computational and information relevance already is rapidly diminishing before the cloud connected mobile device. The huge popularity of mobile applications stores or Apple's selling more than 3 million iPads during the launch quarter are strong signs of shifting relevancy.

By the way, in a strange and perhaps ironic twist, three days ago IBM released a study claiming "more than half of all IT professionals -- 55 percent -- expect mobile software application development for devices such as iPhone and Android, and even tablet PCs like iPad and PlayBook, will surpass application development on all other traditional computing platforms by 2015." IBM surveyed about 2,000 developers and IT professionals in 87 countries. As app development shifts to the cloud, so will computational relevancy away from heavy PC applications. Light, not bloat, is the future of personal computing. Microsoft will fail by embarking on a strategy that solely tries to pull users back to products like Office. The enterprise is going lighter apps on more portable and personal devices.

Microsoft and the Windows PC won't go away, and the company will make billions in revenue for years. But Microsoft's platform will diminish, like IBM's did. It's an inevitable path if Microsoft makes Windows Phone 7 mostly or completely about the enterprise, meanwhile failing to aggressively and wholeheartedly embrace the newer platform. Microsoft's enterprise-focused mobile strategy already has failed -- just look at the market share numbers. The future doesn't have to be failure. Are you paying attention, Steve Ballmer?

Maybe he is paying attention. I was encouraged by Microsoft's marketing messaging and how Ballmer positioned the device during today's launch event. The core message wasn't staid enterprise computing but making the smartphone more personal. Ballmer described Windows Phone 7 as "always delightful and wonderfully mine." He emphasized: "I can represent me in this device," referring to his WP7 smartphone. Ballmer repeatedly used the word "my" to describe the different Windows 7 attributes. My. My. My. My. Mine. The initial messaging is promising.

22 Responses to How should Microsoft open the curtains on Windows Phone 7?