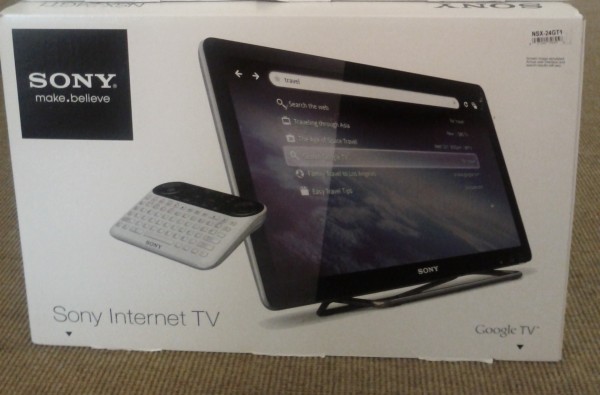 That's the word from an employee at my local Sony Style Store, at Fashion Valley Mall in San Diego. Google TV products should be selling, because Sony has priced them to move as part of a clever back-to-school promotion.

Those prices are standard now, not just for back-to-school, and dramatic decreases -- as much as 50 percent -- compared to just a few months ago. The price cuts aren't far removed from Logitech's. The peripheral maker reported dismal quarterly results in late July -- $30 million loss plus a $34 million charge to lower Reveue's price to $99.99, down from $299.99 a few months earlier. Sony's price cuts could be viewed in similar light -- that Google TV products aren't selling well. But it was the back-to-school marketing and the prices that caught my attention. Where Logitech delivered dismal news to Wall Street, Sony has taken a more positive, retail sales approach by targeting students.

Google and Sony both have strong brand affinity, and many students going to college literally grew up with Google. The information giant snatched the search share lead from Microsoft's MSN late in 2002, according to ComScore, and has kept it since. That 18 year-old freshman was nine years old when Google search rose to prominence. How many Google searches does the average high school student do in four years? That's a helluva lot of time spent with Google, which has done an excellent job promoting the brand and sub-brands like Android (come on, isn't the little robot adorable; I have 10 collectibles now).

Google TV is a great product for the dorm room, because of just how good is the Internet experience. There are sore limitations -- Hulu and some other content providers block their stuff -- but Amazon Instant Video, Netflix and scores of other services are available and deliver an excellent viewing experience. Vevo and YouTube integration are perfect for jamming to music videos.

The $199 option is basically buying a good Blu-ray player and getting Google TV for free. Same could be said about the 24-inch TV. Google TV 2 software is expected this summer, so that has to be soon, supporting Android 3.x and the ability to run apps, including big-screen games. I offered a basic review of the Logitech Revue -- the other major Google TV set-top box -- about eight months ago, if you're interested in a broader perspective.

I hung around the store for about 15 minutes watching student shoppers and was surprised how busy was the Google TV area. Sony has stacked boxes of televisions in the center of one room, where the 24-inch TV is on display. In another area, the Google TV Blu-ray player is attached to a 46-inch TV. A couple of shoppers were logging into Facebook, which prompted a sales clerk to come over and warn them that "everyone can see". "It's your choice", he said, and they choose to keep on logging in.