Eight reasons why Steven Sinofsky is Microsoft's next CEO 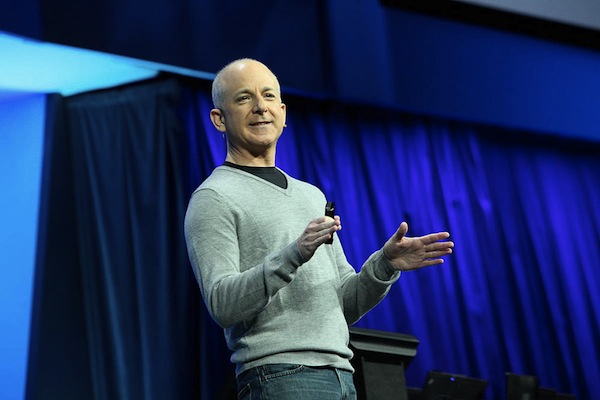 As Windows chief Steven Sinofsky takes the stage in Barcelona Wednesday to debut the Consumer Preview of Windows 8, there's a sense that a new era is dawning at Microsoft. Windows is about to take a dramatic turn and Sinofsky is very much responsible for that.

On top of this, Windows is coming out on time (AGAIN!), a real change in Microsoft's track record of missed deadlines. With current CEO Steve Ballmer's time at the helm arguably less than stellar, you have think there must be someone waiting in the wings at Microsoft to take his place.

That man is Steven Sinofsky, and here's why.

1. He doesn't take crap from anybody. While Sinofsky is apparently a pleasurable person to talk to, working with him is something completely different. He is demanding and asks for 100 percent loyalty to his vision. If you're not on board, you're brushed aside. It is a quality that both Microsoft cofounder Bill Gates and Ballmer lack. While the two men have vastly different public leadership styles, in private they're two in the same.

Neither has solid control of the company, which leads to interdepartmental bickering and inefficiencies. Outside of its successes in Windows -- Sinofsky's department -- what has Microsoft done well in? Not a hell of a lot.

2. He can deliver products on time. I believe this is the most important thing to Microsoft at the moment. When there was only one player in the game, the Redmond, Wash. company had all the time in the world to react. Being late was not that much of an issue. Now with competition from all directions -- Google, Apple, and others -- being late has long-term consequences.

Since taking over Windows development in 2006, Sinofsky has overseen two Windows releases, 7 and 8. Neither have been late. For a company that could never seemingly keep itself on track, that's a huge accomplishment.

(You could argue that he should share some blame for the Vista debacle, but he had assumed control of Windows development long after much of Vista's development had already been done.)

3. He will change the culture of Microsoft. Microsoft's culture has always been one of "groupthink", where everyone has a say in what happens. This way of doing business either slows down or completely halts innovation, and makes the company far less nimble. That's bad news in tech these days.

Under Sinofsky, the company will have far less middlemen (Look at the Windows division, there is no middle management anymore). This results in decisions being made quicker, and the company acting faster to market pressures. Will some hate this? Of course. But the reality is Microsoft's business culture doesn't work well in modern day corporate America.

4. He understands Microsoft. Sinfosky went to work for Microsoft right out of college in 1989. He's seen the company through its best times in the 1990s, and its low points last decade. He knows what works and doesn't. He also has seemingly found a way to make Microsoft's corporate culture work for him, and from his time in Office to his current tenure with Windows impresses with the productivity his departments produce.

5. Like Apple's Mac OS, Windows' paths on desktop and mobile will converge. Microsoft's next CEO should understand the convergence of desktop and mobile. With Windows Phone 8, Sinofsky seems to have done so, as the kernel is same as desktop OS. While the facts are disputed, it appears he has begun to exert control over the Windows Phone division. His code will run Windows mobile devices, and development from here on out will be concurrent.

There is no reason to believe Sinofsky will not have his hands in on whatever happens.

6. He's the closest thing Microsoft has to Steve Jobs. Microsoft's next CEO needs vision and gravitas. While Ballmer likes to have a tough exterior, there's no indication his public persona transfers to the way he manages Microsoft. Jobs' way was the way, and there was no way else. While people may hate this, he was able to get things done.

There's little room to argue that Jobs' attention to detail and a specific vision is what brought Apple back from the dead. While Sinofsky is no Jobs, he does share a lot of the same leadership qualities. Microsoft needs this type of leader.

7. He is meticulous. Sinofsky's focus is arguably one of his best traits: it is said he values quality over quantity. If a feature is not coming along fast enough, that feature gets cut. Underpromise and overdeliver. For a long time, Microsoft did exactly the opposite, and looked foolish as a result. In a Sinofsky Microsoft, this just wouldn't happen.

Microsoft needs a CEO that is heavily involved, not one that is sitting back in his office administrating. A hands-on approach is needed.

8. There's nobody else qualified or ready. Probably the best thing going for Sinofsky is there is nobody qualified or ready to run Microsoft other than him. Bill Gates? No way in hell he's coming back. The rest of the executives of the company just don't stand out. Hiring outside of Microsoft? Another mistake. Change in the company has to come from within.

Steven Sinofsky is this person. While people may be looking for somebody with the smarts of Gates, or the amusing public persona of Ballmer, but neither are right for what Microsoft needs. Sinofsky can deliver this, and if he sets the world on fire with Windows 8, he's certainly earning it.