Samsung Galaxy Nexus and Nokia Lumia 900 is a fair comparison 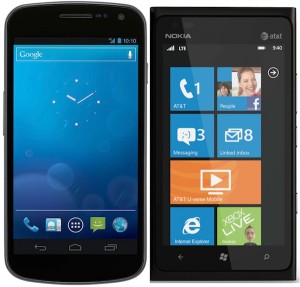 Discussion Counterpoint. Colleague Tim Conneally and I got into a heated debate about smartphone comparisons this morning. He has the Nokia Lumia 900 Windows Phone for review (and I -- whaaaaa -- don't). I suggested Tim do a comparison with Google-branded Galaxy Nexus, which we both have. He refused. Tim was quite adamant about it, too. His out-and-out refusal clearly taps into strong feelings about how products are compared.

We bantered back and forth over group chat, with neither of our positions changing. "Buyers make these product comparisons all the time", I expressed late in our debate. "I can see we won't agree. If I had the Lumia 900, I would compare them". But I don't, and Tim won't. So I suggested: "Let's ask the readers...something like: 'Would you like the Samsung Galaxy Nexus and Nokia Lumia 900 compared?'"

I had planned on one story with both our perspectives, but Tim smartly wrote something longer -- hence we have a separate point and counterpoint. Please read his "Stop comparing unlike objects. RIGHT. NOW." Tim makes the case for why we shouldn't write a post/review comparing the two smartphones, while I advocate such comparison. Your feedback is vital to resolving our debate but also illuminating something else: How products are compared. There are lots of dumb comparisons out there, particularly tech products. Would this be one of them?

Reporters aren't analysts or marketers. Our job isn't to divide the products we write about into tidy little demographic groups. So what if grandmas living on social security in Cleveland are more likely to get free iPhone 3GS, while their grandchildren soaking up sunny Malibu cough up $399 for 64GB iPhone 4S.

Market researchers live for this crap. We aren't Mad Men. We're the last visage of the Fourth Estate, before the Huffington Posts of the world extinguish our breed forever. We write for our readers, who love gadgets and compare many different products by measures that defy demographic modeling. Aggregators and marketers present varnished perspectives. We present the raw wood, with no blemishes covered (so that someone can better put one over the other to sell something).

Tim contends that from the demographic perspective, the two smartphones aren't comparable -- that they appeal to different people. "Comparing them would be like comparing a
helicopter to a motorcycle because they both run on gasoline", he writes. Price is one reason ($299.99 for Galaxy Nexus and $99.99 for Lumia 900) and segmentation another (the Android handset appeals to bleeding-edge enthusiasts and the Windows Phone to the mass-market). That reasoning is a bunch of Android apologist horse poo-poo.

Galaxy Nexus and Lumia 900 is a fair comparison, because many BetaNews readers will do so in choosing one over the other. Google "Galaxy Nexus vs Lumia 900" or "Which is better Galaxy Nexus or Lumia 900?" There are comparisons out there already and for a reason. People want them, which is good enough for me.

Tim contends that in part because of price Galaxy Nexus "was not --and is still not-- a mass market device". Really? So what, Google, Samsung and Verizon partnered to sell the smartphone to 100 people? This is Google's flagship phone -- of course, the goal is to sell many of them.

By Any Other Name a Smartphone

Galaxy Nexus isn't a helicopter and Lumia 900 a motorcycle. They are LTE smartphones sold nearby one another in stores like Best Buy. They would be in a carrier's store if AT&T or Verizon sold both. Falling back to hollow out the market position thing, the segment that matters most here is smartphone -- people shopping for one and making decisions on lots of similar criteria: Battery life, brand, camera, carrier, data speed, ease of use, operating system and size, among many similar attributes.

Best Buy also sells many different televisions alongside one another. By the no-comparison reasoning, no budget shopper would ever consider the $1,200 big-screen TV over a $500 model. People make product decisions every day based on all kinds of different criteria. A friend of mine recently compared the Fuji X10 and X100 digital cameras. The X10 sells for around $600 and the X100 for $1,200. One is an advanced point-and-shoot camera, while the costlier model is more for amateurs and pros. Their target segments are different, yet there is much overlap in features and appearance. By Tim's reasoning, my friend would never have compared them.

My other reasons for comparing the phones have little to do with product segmentation or buyer demographics:

Those are enough reasons for now. But are they reason enough? I say Galaxy Nexus and Lumia 900 is a fair comparison. Tim disagrees. What do you say?