Would you believe Android tablet adoption is even with iPad? 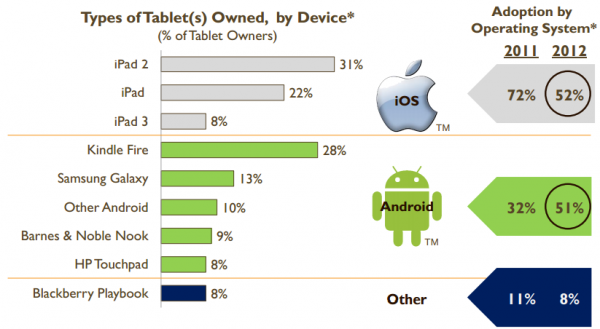 I surely don't. Perhaps even I am too influenced by all the pro-Apple propaganda. But the figures come from a reasonably reliable source, Online Publishers Association, which puts US iPad adoption at 52 percent and Android at 51 percent. Okay, I'll pause so you can wipe off coffee, or whatever else just spit out, from your computer screen.

The numbers don't add up to 100 percent, because some people own more than one type of tablet. Android gains largely come from Kindle Fire, which share is 32 percent -- four times new iPad and one point more than the original. Year over year, overall Android penetration rose from 32 percent, while iPad's fell from 72 percent. Perhaps it's no coincidence Android rose by 19 points and iPad fell by 20.

But I'm skeptical and have a couple problems with the data; timing is most significant concern. Frank N. Magid Associates conducted the survey -- 2,540 Internet users ages 8 to 64 -- for OPA between March 19 - 26. New iPad launched 3 days before the surveying started. Three months has passed, during which time several analyst firms report or predict strong iPad shipments, but plummeting Kindle Fire. Additionally, Apple lowered iPad 2 price to $399 in March, presumably lifting the tablet's sales. OPA's report can't reflect these market changes in a market so rapidly changing as tablets. Three months is simply too long, particularly during a popular product launch.

I don't doubt other findings: Tablet adoption among US Internet users rose from 12 percent in 2011 to 31 percent this year -- that's 28.3 million to 74.1 million people. OPA predicts that tablet penetration will reach 47 percent next year, or 117.4 million people.

Contrary to some other reports, OPA finds that Android and iPad customer satisfaction is fairly close -- 90 percent and 95 percent, respectively. That's measured by "very" and "somewhat" satisfied combined.

Amazon and Apple have both done exceptionally well wooing publishers to their devices, but, surprisingly, what they offer isn't what tablet users want most. Forty-one percent prefer the mobile web for accessing magazine and newspaper content, compared to 30 percent for dedicated apps and 22 percent for newsstand apps like Zinio.

That doesn't reflect on overall app demand, however. Once again, OPA's report doesn't jive with others touted by the Apple Fan Club showing huge disparity between Android and iPad users. Seventy-nine percent of iPad owners buy apps compared to 66 percent of their Android counterparts. Overall, app downloaders spent $2.6 billion based on the 2012 survey, up from $1.4 billion last year.

Apps aren't the only items being purchased, and this perhaps shows the wisdom of Amazon the retailer producing a tablet. US tablet owners spent an average $359 on purchases made from their devices in the previous 12 months. Twenty-one percent purchased retail and apparel and 19 percent consumer electronics.

Get this: 38 percent of buyers purchased products after seeing an advertisement. However, people who simultaneously use a tablet and other devices are even more likely to purchase after seeing ads -- 45 percent for two-screeners and 50 percent for three-screen consumers (such as PC, tablet and Phone).

Other findings worth calling: 74 percent of tablet owners use the devices daily -- 60 percent several times a day. For the PC rabble calling tablets toys, these findings show something else.

32 Responses to Would you believe Android tablet adoption is even with iPad?