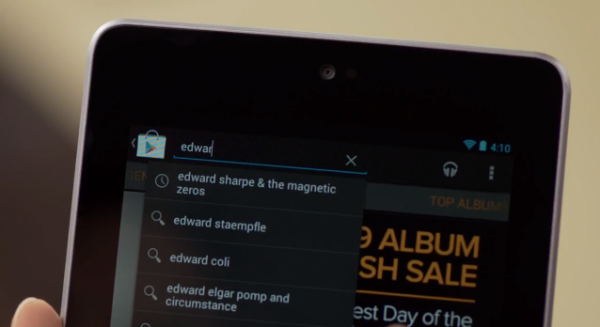 Google's tablet is off to a rousing debut. I doubt sales numbers will reach iPad standards, but Nexus 7 is nevertheless hotly pursued and reports from early adopters evoke pure delight. If you want one and haven't ordered, be prepared to wait. In the United States, delay is now nominal for the 8GB model -- 3 to 5 business days before shipping, according to Google Play. Prepare to wait three to four weeks for the 16GB tablet, however. That's from Google, which right now has best availablity following the first weekend rush.

I preordered one for my wife on June 29, hours after returning from Google I/O. Soon as she saw my Nexus 7, Kindle Fire was history. Shipment notice dispatched while I was at Comic-Con on July 14, and the tablet arrived early afternoon yesterday. I watched a fairly consistent stream of Google+ posts all day, as those people who preordered received their tablets.

Some people who didn't preorder got Nexus 7 sooner in stores -- Costco, GameStop and Staples, among others. Now, the majority of these shops are sold out. I called a couple local GameStops. The largest only received models for which there were reservations -- and 8GB at that. I asked when more might be available, and a sales rep told me, "Probably not for a month or more". GameStop online lists only the 16GB tablet, available in 3 to 4 weeks.

In fact most of the online stores I checked -- everything from B&H Photo to Fry's Electronics and more -- only list the 16GB for sale, and backordered. That surprises me since the $199 price is as appealing as the features. The higher-capacity model sells for 50 bucks more.

The 16GB Nexus 7 is special order from Staples, in stores -- forget online. However, I called my local store, where an associate told me that "every Staples in the area sold out". He expects 8GB tablets in stock by the end of the month and the larger capacity middle of August.

Google has posted updated shipping information, and not just for the United States:

We’ve had incredible demand for our new Nexus 7 tablet and are shipping them as quickly as possible. When your device ships you will receive a notification from Google Play with a shipping tracking number. We will have all orders placed through July 13 processed and shipped soon. Orders placed after July 13 will ship according to the quoted timeframe when you purchased and we will update you with a tracking number when we've shipped. Thanks for your patience.

Below are more specific details by country for devices ordered through July 13. If the below information is not true for you, and you ordered on or before July 13, please reach out to our support team so we can investigate.

We’ve shipped all Nexus 7 8GB orders. We are in the process of shipping Nexus 7 16GB orders and will ship them in 1-2 weeks.

Joy is pejorative across techdom. Nexus 7 owners are mighty pleased, if social network postings are any indication.

Michael Dominick: "Loving the Nexus 7. I may finally have found a device I like more than my iPad well done #android. Makes me really want to refocuses a bit. Of course then I use the Kindle FIre and run back to the iPad or Nexus ;)"

Coincidentally, as I started writing this section, Brian Fagioli chatted: "Unlocked, rooted and on a custom ROM already. Love this n7!" I replied: "Beats the hell out of iPad, doesn't it?" "Totally. I'm in love". He sold a first-generation iPad to buy Nexus 7.

Fagioli isn't alone. "Not gonna lie, this Nexus 7 is the real deal. The ipad1 may be going into an early retirement", Erik Westin remarks.

Linux creator Linus Torvalds received his Nexus 7 yesterday but has "absolutely nothing to report". Do get back to us, Linus.

Rob Horton: "First impressions of my Google Nexus 7: Google has put forth a winner! Totally rocks!!!"

Satisfaction with device and Jellybean is tasty cake, but people want -- and aren't getting -- the icing. "Loving the Nexus 7. Definitely the right size for a tablet", Michael Heller posts. "Of course, it is also letting me see that the Play Store selection for tablet apps can be a bit wonky. Not to mention the ever present issue of apps not being compatible with the newest Android update. I cannot understand why devs put a platform version ceiling on apps. If NBA Jam worked on ICS, there's no reason it shouldn't work on JB".

Rashun Roc Mallory: "Loving the Nexus 7! Think I'm sticking with the pure Android experience for a very long time. I'm a believer lol. And I didn't think I'd like a 7 inch tablet -- boy was I wrong".

I've already done a first-impressions review and likely will do another. What I'd really like is your review. In comments is fine, but for publication with your byline, bio and photo is better. Please email joe at betanews dot com.

84 Responses to Nexus 7 sells out