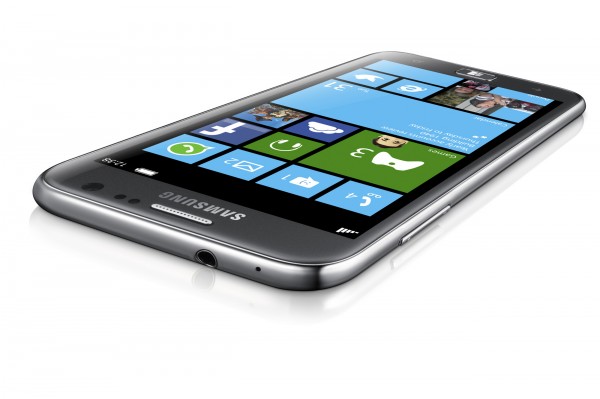 Samsung's recently-announced Windows Phone 8 smartphone, the ATIV is oozing with power and modernity, and that is what the Windows Phone software needs to finally become a dominant platform.

A platform needs flagship devices --smartphones and tablets-- to showcase what it can do in front of (possibly) billions of people, and hardware-wise it doesn't get any better than Android and iOS devices displaying their inner strength, their performance. Android takes first place and iOS second in the smartphone charts, and they have halo devices to represent them. Windows Phone, meanwhile, has been a mere shadow behind the two flexing their muscles. The Samsung Galaxy S III best represents Android as much as the iPhone 4S best represents iOS, but what does Windows Phone 7.5 have to show? A single-core CPU with 512MB of RAM and a GPU that was news a few years ago? That doesn't cut it...

As much as Microsoft likes to make its own rules, it messed up (quite badly some may argue) by imposing too strict hardware restrictions. Microsoft had to ensure a certain level of performance at a certain cost, and there's also the possibility that restrictions came due to limitations on component compatibility. Take the popular Windows Phone 7.5 smartphone, the Nokia Lumia 900 -- it's one of the best WP 7.5 devices out there, but that's it as far as hardware goes. It's got a 1.5GHz CPU, 512MB of RAM, no SD card slot, no 720p resolution, no 1080p video recording... basically it has nothing that even mid-range Android smartphones have now. The price? Last I checked, the unlocked European version was more than $660, making it one of the most overpriced smartphones on the market. No wonder people are not rushing to buy them.

So what has Samsung changed that makes the ATIV a flagship device? First of all, Samsung got rid of the old CPU and threw in a dual-core 1.5GHz processor (I think it's a Qualcomm Snapdragon S4, that is the popular 1.5Ghz dual-core CPU of choice found in new smartphones), backed by 1GB of RAM with those nice tiles displayed on a 720p 4.8-inch Super AMOLED screen. There's a microSD card slot thrown into the mix as well and the camera can actually shoot 1080p video. Wait a minute, it sounds like Microsoft is looking at Google and Apple and saying "Your move!"

That I like. The fluidity of Windows Phone can only be improved by powerful hardware and finally someone can buy a smartphone with an operating system designed in Redmond, Wash. and be proud to have modern hardware. I've been rambling about great hardware because it is important for a number of reasons.

First of all, and most obviously, it appeases smartphone buyers like myself who crave hardware specs and buy by the numbers.

Let me give you a personal reference. A month ago I bought a Samsung Galaxy Nexus HSPA+ because obviously I like the thing, but also because there was no Windows Phone 8 device on the market or even a Windows Phone 7.5 smartphone with at least similar specs. People like me that do not want to buy outdated hardware, will have a more difficult choice and a very good reason to also consider smartphones like the Samsung ATIV and to be honest, I'd give it serious consideration before buying a new smartphone. Why wouldn't I?

The other benefit of market-leading hardware specs is that it creates a level playing field with competitors. When hardware ceases to be a bone of contention, the software can shine without having to be considered handicapped or unfairly helped by differing hardware.

It's not necessarily just Samsung, either. There are rumors circulating that suggest Nokia's upcoming Lumia smartphones will have similar specs. While all rumors should be taken lightly, they are often grounded in some logic. The Windows Phone platform has gone through generational evolutions, and WP8 is a point where a big overall upgrade will be made.

As it sits now, Microsoft's mobile operating system is right where it needs to be -- in balance. It offers some customization but not too much, it's kept tight by Microsoft, and it's got the power under the hood to back it up, but it's not afraid to run on cheaper devices. I feel like it's stationed in the middle of Android and iOS in terms of features and philosophy, and that might just be the best idea Microsoft has ever had for its own Windows Phone.