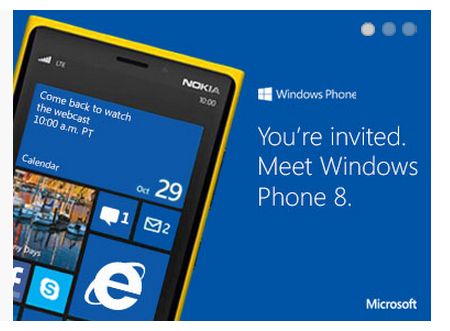 Eight might just be a lucky number for Microsoft. The company launched Windows 8 in New York just before a crippling hurricane arrived and took out a competing Google Android launch event; and today, it launches Windows Phone 8 in a San Francisco still reeling from the Giants winning the World Series.

Today at 10am Pacific, Microsoft will be hosting the live launch event of Windows Phone 8, which we have been expecting since late June, when it was first revealed.

Like you, we're very interested in seeing what Microsoft has in store for us with its new generation mobile operating system, and we're going to pay especially close attention to new enterprise functionality and mobile device management capabilities. These features, though incredibly important, were largely glossed over during the Windows 8 event last week, and the general trend of touch and mobility were highlighted.

Microsoft is streaming the event live here and also on the Windows Phone Social Hub on Facebook. We'll be providing live synopses, commentary, and general play-by-play for you this afternoon. Stick with us!

2:00pm EST--Steve Ballmer highlighting new Windows Phone 8 devices: Nokia Lumia 920, Samsung Ativ S, and HTC 8X, These will go on sale in Europe this weekend, and will roll out worldwide in November. In the United States, Verizon will start carrying exclusively the Samsung Ativ Odyssey, also the HTC 8X and Lumia 922, AT&T will exclusively carry the Lumia 920, as well as the 820 and HTC 8X. All 65 Microsoft stores will carry every Windows Phone.

1:51pm EST-- Joe Belfiore is talking about the marriage between Xbox 360, Windows, and Windows Phone via SkyDrive and Xbox Music, definitely a strong connection and strong selling point for the ecosystem.

1:44pm EST-- "Rooms" is a new feature within the People Hub in WP8 which lets users organize contacts into smaller groups for messaging and content sharing. This feature looks remotely similar to BlackBerry Groups and Google+ Circles.

1:38pm EST-- According to her onstage testimonial, Actress Jessica Alba is one of those rare Mac/Windows Phone users.

1:33pm EST-- "Kids Corner" guest mode lets parents change settings of their phones to let their kids play only what they're allowed to play. Joe Belfiore's daughter called him "mommy."

1:27pm EST--"Datasense" in Windows Phone 8 includes server-side data compression a la Opera Mini and Skyfire browsers to minimize mobile data consumption. Rolling out beginning this Fall with Verizon Wireless, will continue through 2013 on other carriers.

1:23pm EST-- New Windows Phone 8 SDK will be available tomorrow for everybody.

1:16pm EST-- Windows Phone 8 lockscreen will feature integration with Facebook, text and icons can also be altered in WP8 lockscreen.

1:09pm EST-- Apple standardized the interface in modern smartphones, and Android copied it, and it hasn't changed in the last five years. This is what we've heard repeatedly from Microsoft: "People are the center of the experience in Windows Phone" and not icons and apps.

1:06pm EST-- Joe Belfiore says he wants to "move past" the recent excitement of Windows 8 with this launch.