What you need to know about Microsoft's 'New Office' 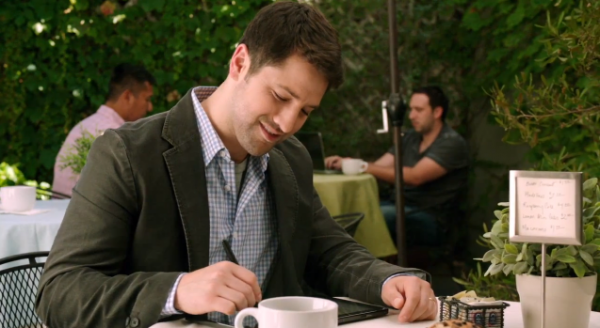 Even though Microsoft's lips have been sealed shut on the topic, launch of Office 2013 (and the new Office 365) is imminent. Speculation is fueled by the Office 2013 available on its Home Use Program (HUP) website, something which has customarily preceded most prior Office launches. If the show is about to begin, then all of these preparatory charades are quite the indicator.

Martin Brinkman provided a wonderful in-depth preview on Office 2013 this past summer, and the great majority of what he covered is still valid in the final bits. I've personally been using a MSDN copy of Office 2013 Pro Plus since about late October and am quite pleased with the product. Ever since Microsoft dabbled with x64 capability in Office 2010, in-house developers increased memory and security aspects that 64-bit provides and the result is a smoother, safer Office experience. Microsoft posted a long Technet article on the benefits of x64 Office 2013 this last summer.

There's a surprising level of confusion out there, even among fellow IT professionals, about what the new flavors of Office entail. And rightfully so, with Microsoft making reference to Office 2013 and Office 365 interchangeably as of late -- even coining a new unified term, the "New Office". After some careful research on the web and doing some of my own digging, I've come to a pretty good understanding of where Microsoft is headed with everything Office-related. Here's the full scoop.

Office 2013 is all-but-confirmed for a January 29 launch under three different-but-related product names. You may see reference to any of these monikers, depending on which route you're heading with your Office upgrade path. Thanks to Microsoft watcher Mary Jo Foley, we now have a pretty crisp picture of where all these editions fall into line.

The key distinction between the editions here lies, first and foremost, in whether you plan on going the cloud-based subscription route, or if you are going the boxed copy route. The more traditional physical copies of Office 2013 follow a similar pattern of previous releases, especially if you are familiar with Office 2010's flavors. For $140 you will be able to pick up the Home & Student edition; Home & Business will run $219; and Professional will cost $400 (not shown below). Office 2013 Standard and Pro Plus are available through the educational and Software Assurance channels only, meaning you won't be able to purchase these in any store.

Microsoft truly believes, however, that the cloud subscription route (Office 365) is where the public wants to go. I'm personally a boxed-copy kind of guy, so the subscription model is a tough sell, but I can't predict what others will think of this. Adobe paved the way for the pay-as-you-go model when they took Creative Suite to the cloud earlier last year, and Microsoft has followed suit with Office. 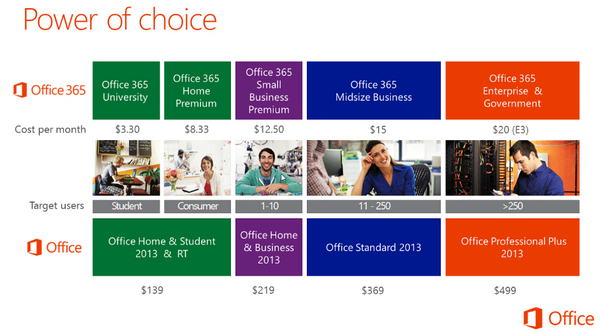 Looking at the matrix above, you'll notice how aggressive Microsoft is with the monthly price tags, especially at the Office 365 Home Premium and University levels. Home Premium is probably the juiciest option of all, allowing for up to 5 devices to be used on a single subscription for under $9 per month. This edition of Office 365 is the one Microsoft hopes to lure people over to who are used to the boxed Home & Student edition, that has offered multi-user installation rights since version 2003. Microsoft has nixed this nicety in Office Home & Student 2013, presumably to bait home users to switch over.

Another item that confuses some folks: which editions of Office 365 will most resemble the traditional O365 offerings aimed at businesses. More specifically, the Office 365 flavors that feature Exchange Online, Lync Online, etc. Through various outlets, it has been confirmed that the Small Business Premium level and higher will be the ones that contain downloadable Office 2013 copies alongside Microsoft's hosted Exchange Online, Lync Online, and the other business-centric items companies care about. 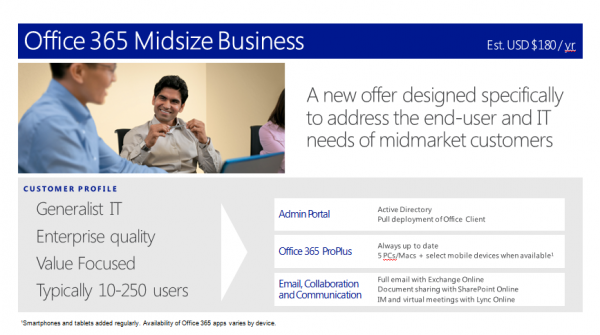 These new business focused subscription levels will fit alongside Microsoft's current Office 365 lineup, which has price points for every comfort level. I'm personally curious to see where Microsoft takes the new Small Business Premium offering, since I ratted out the current Small Business (P1) Plan pretty heavily in a previous op/ed on Office 365. One of my biggest gripes about the current P1 offering is its lack of 24/7 phone support for customers, even though the Email Only plan (which costs $2 less per month) does get full phone support treatment. Hopefully, Microsoft listened to the complaints about this discrepancy and will make some changes come later this month.

Current Office 365 Customers get Hit with Improvements as Well

One of the nice parts about the upcoming unified Office 2013/Office 365 launch: Microsoft is going to extend quite a few improvements to its current Office 365 customer base as well. Not to be left behind, they are going to be notified via their web portals about a looming "refresh" that will introduce quite a few new features and enhancements. Seeing as I've already moved some of my FireLogic customers to Office 365, this will definitely be a pleasant surprise.

Some of the biggest things hitting O365 during the next refresh cycle include:

The new landscape of what Office 365 looks like is starting to become more clear, as the lines blur with what Microsoft considers solely "traditional Office software" in the way we used to know it. Soon the "New Office" will be just that: a fresh, bold direction for a flagship product that has withstood the test of time. When Microsoft proclaimed it was "All In" with the cloud a few years back, now we can safely say it wasn't joking around.

Want your Boxed Copy of Office? It will cost You (a Bit) Extra

If there's one way to stick it to those who prefer to get their software the old school way, it's to tack on an artificial price premium. Not only that, but Microsoft is killing off one of the finer points with purchasing the boxed edition of Office (Home & Student edition, specifically) in that every flavor will have a single user install limit. Seeing that Home & Student 2013 costs a few more bucks than 2010, it's more than a little upsetting.

It's fairly clear that Microsoft's reasoning behind the price premiums is to slowly carrot-and-stick users onto its Office 365 plans. Joe Wilcox does a good job in outlining the new price points for the boxed editions of 2013, and the results won't win over any fans who were planning on upgrading via DVD. License to license: 180 percent increase between Office Home and Student 2010 and 2013 versions and 76 percent for Home and Business. Looked a differently, Microsoft nearly trebles Office Home and Student 2013 for anyone wanting three licenses.

Was it a good idea on Microsoft's part to raise these prices so sharply? Yes and no. If you believe in the manifest destiny of Microsoft's Office 365 cloud path, then yes, winning over users via a price war may be the ticket. However, even among my own customer base, there are many users who refuse to pay for a subscription on a piece of software that has always been known for its boxed copy releases. Changing that attitude among those potentially upgrading will be a difficult sell.

SkyDrive is on a Bold Crash Course with Google Drive, Dropbox

Perhaps one of the most under-the-radar aspects of the recent Microsoft wave of updates is the continual push to get SkyDrive adoption on the up and up. To a certain extent it's working quite well. My Google Apps customers have been loving Google Drive since it came out in mid 2012, but SkyDrive's "me-too" approach to the online storage market is a welcome competitive strategy. In my own informal testing, it's a solid alternative to Google Drive, and for already-heavy Office users, it may be a no-brainer.

It's nice to know that Skydrive now offers 7GB of free storage space (topping Google Drive, which only has 5GB free), which is pretty commendable, seeing as the popular Dropbox only offers a measly 2GB. Office 365 Home Premium users get an even sweeter deal, however, because Microsoft tosses in a bonus 20GB of SkyDrive space per user. The storage is completely stackable on the free 7GB already available, bringing you to a whopping 27GB at no extra cost. I have my reservations about moving to a subscription-based model for my Office needs, but this may be the freebie that brings me over the top.

And unrelated to SkyDrive, Microsoft announced 60 free Skype minutes per month on Office 365 Home Premium subscriptions. If you happen to be one of those folks who increasingly use Skype as a phone replacement, this could be of good value to you as well.

Will Microsoft's push to unify Office and Office 365 be a Winning Strategy?

It's anyone's guess if the cloud model for Office is the right way to go. On the outset, yes, the pricing is darn attractive and the fringe benefits you get scream value, especially over that of the boxed editions. But tossing freebies and likable pricing at users won't change the fact that there is a perception gap that Microsoft has to hurdle. No matter which way you slice it, Office started its life as a boxed product and there is a sizable user base that will likely never see it any different way.

I'm going to give Microsoft the benefit of the doubt on this experiment. The critics claimed that Exchange users would never take their email to the cloud; yet Office 365 got its rise to glory by tearing down the notion of on-premise servers. If Microsoft has its way, perhaps more of its core software base will move into a subscription model, paving the way for a fresh new era at Microsoft. Perhaps this could be the start of Microsoft reinventing itself and getting us prepared for a future of paying monthly for the software we need.

Is this necessarily such a bad approach? While I'm personally an old-school guy when it comes to my software, I think if the price is right and the terms are customer-centric, then the cloud can actually be a good thing. As users we are already accustomed to paying monthly for our cell service and internet service, so adding Office rights to that mix may not be so crazy after all.