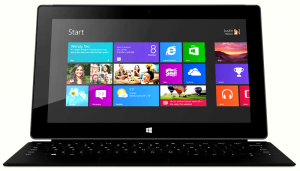 Microsoft is no stranger to controversy, even attracting negative attention when it comes to the advertised storage of its own Surface tablet lineup. The interwebs buzzed after the company admitted the shortcomings of Surface RT, which only comes with 16GB of user-accessible storage in 32GB trim, and now the same issue is raising its head all over again with Surface Pro, just days before the big launch.

As most knowledgeable Windows users will concede, Microsoft's latest consumer operating system does take up quite a bit of storage space due to its fully-fledged nature. For example, on my personal computer running Windows 8 Pro 64-bit, the "Windows" folder by itself uses just over 16GB. So it's not overly difficult to imagine Windows 8 Pro will take up a lot of Surface Pro's free space. Of course this is something that educated pundits surely know (or at least they should).

After reaching out to Microsoft regarding the user-accessible storage on Surface Pro, a company spokesperson stated the following for BetaNews:

First of all it has to be explained that the actual formatted capacity is different from the advertised figure due to the way software computes available storage. To give you an idea of the difference between the two, the 240GB Intel SSD 330 Series drive in my computer only has 223.57GB accessible. Similarly, the 64GB and 128GB Surface Pro models have about 59.52GB and 119.05GB respectively available for the operating system and software.

Windows 8 Pro with all its bells and whistles (including the recovery partition) robs the user of roughly 36GB of space, which is fairly normal considering the high storage requirements that the operating system actually has. At the same time Microsoft's answer explains why there is no 32GB Surface Pro model -- the pre-installed software simply cannot fit. By contrast, Windows RT only needs roughly 13GB. The question here is: Does this loss of space in the Pro version really matter?

Surface Pro is designed for business users, and they will have to choose the right version with even greater care compared to Surface RT. The 64GB model only has 23GB of free storage, whereas the 128GB variant comes with more user-accessible storage at 83GB. Depending on the user's requirements the entry-level model might be a tight fit seeing as the tablet is designed to run fairly large apps such as Adobe Photoshop, Autodesk AutoCAD and similar programs. Therein lies the problem -- the entry-level model is just not "roomy" enough for a demanding user's peace of mind over time.

Microsoft says that the microSDXC card slot on Surface Pro can house (up to) 64GB memory cards, which indeed can be used to store "additional content" but that is not an acceptable alternative to the internal SSD drive (which is faster) for installing apps. An external card is mostly designed to be swappable, not to house installed software, which can be an issue when dealing with and going through multiple memory cards throughout the day.

The 64GB Surface Pro model retails for $899, while the 128GB Surface Pro runs for $999. In spending $100 more, prospective users can take advantage of a further 60GB of internal storage, or 2.6 times as much as the entry-level model. The difference in pricing is not all that substantial when we're basically comparing two very expensive devices and can be easily justified by the benefits it provides both in the immediate future as well as in the long run.

Sure, users can regain some occupied storage by removing the recovery partition and using a bootable backup USB drive instead, but then again it's not exactly a sensible alternative to buying the 128GB Surface Pro variant. Microsoft didn't mention how much storage the recovery partition actually uses which leads me to believe that it's not really all that much. Which makes sense seeing as Windows 8 only needs the installation disc (which takes up less than 4GB) to perform a factory reset or restore.

So where does that leave the prospective Surface Pro buyer? Well, after all is said and done, to my mind the only model worth buying is the 128GB Surface Pro, which will allow users to install a higher number of applications and even store some multimedia content without worrying about memory cards or lugging around portable HDDs alongside an already large and fairly heavy tablet.