Microsoft’s attacks on Google are sad and embarrassing 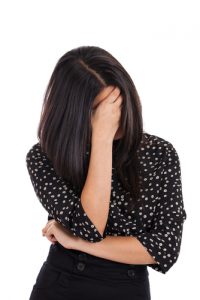 After I left school I went into sales. And one of the first things I was taught was this: never disparage the competition. Never say bad things about them -- even if what you’re saying is true, or you believe it to be at least -- because it makes the firm you’re representing seem petty and small.

Clearly this is a lesson Microsoft needs to learn. The firm’s marketing department, in particular whoever came up with the Scroogled campaign, is doing its best to turn the Redmond, Wash.-based technology giant into a petty, whining child, complaining about a rival rather than championing its own products. Instead of shouting triumphantly, "Use Outlook.com because it’s great and has all these benefits", Microsoft is reduced to grumbling, "Don’t use Gmail because it reads your emails". It’s not an aggressive information campaign as some people have described it. It’s a sad and frankly pathetic strategy.

I like Microsoft as a company, I like (many of) its products and to see it engaging in these sort of low-level scrappy tactics makes me a little sad. Microsoft is better than that. Or it should be.

The original Scroogled campaign attacked Google Shopping. Microsoft called out its rival for using a "pay-to-rank" practice that presented users with search results that were neither honest nor fair. The latest Scroogled crusade says people shouldn’t use Gmail because Google goes through users' personal emails to sell them ads. When I read that I cringed. It was an old, old issue dredged up in an act that surely resulted in the barrel scraper responsible for it getting a handful of splinters in the process. Sarah Perez at TechCrunch summed it up best for me when she reported the campaign with this opening line: "Hey Microsoft, 2004 called. It wants its privacy outrage debate back".

Microsoft’s The Browser You Loved To Hate campaign for Internet Explorer is the opposite of the Scroogled one. It’s clever, funny, pokes fun at the veteran browser and sells the product in the process. It makes you respect Microsoft for acknowledging how people feel about IE, and uses goodwill and positivity to attempt to change public opinion.

Scroogled is mean-spirited and in the case of the Gmail attack, comes across as desperate. 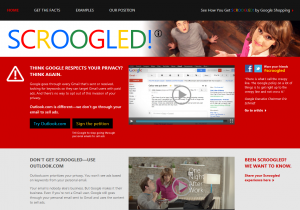 What future delights does the Scroogled campaign hold for us I wonder? "Don’t use Android because its ideas and technology are stolen from the iPhone!", "Don’t use Street View because it’s encouraging Google to look through your living room curtains and leach private data from your Wi-Fi"… Perhaps Microsoft will launch an ad campaign aimed at warning Safari users that Google might have tracked them without their permission and promising Bing won’t do the same thing (oh wait, Microsoft already did that last one).

Of course Google does bad things from time to time, but Microsoft -- hardly the most trustworthy of moral crusaders anyway -- isn’t the firm to call them out for it. Leave that to the privacy advocates.

Instead of attacking Google, Microsoft should finally try to learn from it. Google built (or acquired and polished) products that consumers wanted to use. People switched from AltaVista and other search engines to Google because its site produced the best results. Those same people switched from Hotmail to Gmail because Google had the better email service (and didn’t bombard users with flashing adverts and spam). Consumers use YouTube because it’s fantastic, and Google Maps, Chrome, Reader, Calendar etc. for the same reasons.

Sure, Google produces a fair amount of duds, but when it scores a success it’s usually because the product it’s offering is superior to what’s out there and people flock to it.

I won’t switch to Bing, or Outlook.com full time because they aren’t as good as what I’m getting from Google (I briefly moved to DuckDuckGo for search, but got drawn back to Google as we all are eventually). Scaremongering and the unholy trinity of fear, uncertainty and doubt are unlikely to ever make me switch my search engine or email provider.

But the promise of a genuinely superior product might.