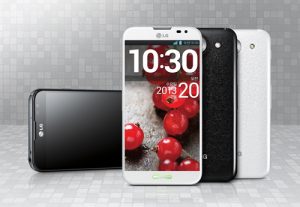 Unveiling a smartphone without specs is like announcing a movie without releasing a trailer and only showing the poster to get everyone excited. That's exactly what LG did, little less than a week ago, with the 'second and different' Optimus G Pro. It got us confused, and worked up, and took the South Korean manufacturer until Monday to finally give in and spill the beans.

Last week LG revealed very little about the Optimus G Pro, only focusing on two major areas -- the display and the processor. The former is known to feature a "2.5D" effect, similar to the faux-3D virtual geometric model used in games, for instance. The panel is a 5.5-inch unit backed by a resolution of 1920 by 1080. LG gave even less away when it came to the processor, only mentioning that it is of quad-core origin. But let's stop looking at the poster and watch the trailer instead.

The Snapdragon 600 is known to feature an Adreno 320 graphics card, a Krait 300 CPU and LPDDR3 RAM, basically an evolution from the Snapdragon S4 Pro found in current high-end smartphones. The chipset includes support for 4G LTE connectivity, which the Optimus G Pro also features.

The handset comes packing 32GB of internal storage including support for expandable memory though a microSD card slot. The latter can accommodate cards up to 32GB in size. The Optimus G Pro ships with a 13MP back-facing camera with LED flash and a 2.1MP front-facing shooter.

Unsurprisingly the smartphone runs Android 4.1 Jelly Bean, version number 4.1.2, and includes typical LG software add-ons such as QSlide, Live Zooming and Quick Memo. The handset even allows users to shoot video simultaneously with both cameras through the Dual Recording feature.