By taking on Apple, Microsoft marketing finally nails it 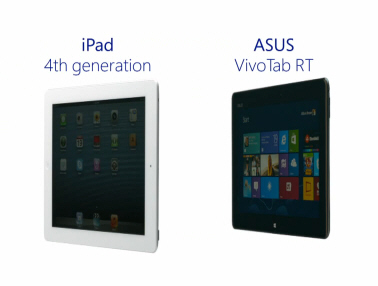 I recently wrote about some strange but awesome Windows 8 ads geared towards the Japanese market. It appeared that people across the internet were pretty down on them as the ads didn’t say anything about the OS. My point in the article was to show that there are different types of advertising and sometimes companies need to get our attention in some pretty unusual ways.

I’d still like to see Microsoft focus more specifically on features of these products that make them better than the competition. Take the Surface commercials for example. I absolutely loved the way Microsoft first introduced us to the product: remember the commercial with the dancing school girls? Loved it. And now the company is running a slightly different twist on that with dancing business users to introduce the Surface Pro. Almost six months on the market and all we know about the Surface is that it clicks…and you can dance with it.

Microsoft wasn’t saying much about why the typical consumer should choose the Surface or any Windows 8 mobile device above the iPad. Until now. This week two commercials were uploaded to YouTube. Both completely focus on features and clearly explain why consumers should choose Windows devices over an iPad. One of the ads, which my colleague Wayne Williams looked at yesterday, is quite funny as it uses Siri to take shots at iPad weaknesses, and the other, embedded below, simply pits the iPad against the ASUS VivoTab RT and compares thickness, weight, suitability for work use, multi-tasking, external connections, and the ability to print. Naturally the VivoTab wins hands down.

For those of you who don’t like the fact that Microsoft is taking a dig at Apple, I remind you that this is precisely the approach that Apple took to get attention for Mac OS. Remember the "I’m a Mac" switcher campaign? I thought so.

So what do you think? Is Microsoft on track with these? Will these convince consumers to go out and buy Windows devices?

44 Responses to By taking on Apple, Microsoft marketing finally nails it